Bhoothakaalam Movie Review: Revathy and Shane Nigam Star in This Well-Acted ‘Horror’ Film That Frightens You With Its Realism (LatestLY Exclusive)

Bhoothakaalam is a Malayalam psychological horror drama that is directed by Rahul Sadasivan and is produced by actor Shane Nigam. Nigam plays the lead along with Revathy in the movie. Bhoothakaalam is streaming on SonyLIV. 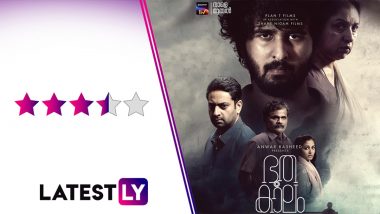 Bhoothakaalam Movie Review: Controversial Malayalam actor Shane Nigam, of Ishq and Kumbalangi Nights, turns movie producer with Bhoothakaalam, that is directed by Rahul Sadasivan. It is a psychological drama that doesn't really stick to its genre, moving to spooky territory without losing what it built before. Damn, that title should have been a hint enough. While Bhoothakaalam means the 'past', the first part of that word is of course associated with spooks and ghosts. Here, it is loaded with the context that the characters are haunted by the ghosts of their past. If that isn't enough, the opening sequence should have been a clue as well. Bhoothakaalam Trailer: Revathy, Shane Nigam Deliver A Stellar Act As Mother-Son Duo In This SonyLIV Thriller.

In the first scene that is set in a darkened room, a bent woman is seen entering the room, her hair askew and in a flowing dress. She sits on the bed of Vinu (Shane Nigam), who gets up and switches on the light. The woman turns out to be his senile old grandmother (Valsala Menon), and it felt like she does this activity frequently. Vinu wakes up his mother, Asha (Revathy), and they bring the granny back to her bed. Then, Asha tells Vinu to help her in changing the granny's diaper. Vinu is not happy with the task, but he acquiesces to his mother's demand.

Asha is suffering from clinical depression for years, which has been compounded by her husband's demise, her son's lack of employment and now now her mother's death. Vinu's frustration at not getting a job and not being to able to move out of his mother's control is making him more and more desperate. The quarrels between them increase as each blame the other for the situation they are in.

It is then that Vinu begins to experience some strange happenings in the house. Whether it is his imagination or if there is truly something paranormal around, I won't delve into that. All I can say is that Bhoothakaalam is a scary movie indeed, but the terrors come more from how it tackles the themes of depression, suicidal tendencies, loneliness, guilt and fragility in a relationship that is as revered as a mother has with her child, and vice-versa. Not to mention, as the title says, their shared past that continues to haunt them.

There are some movies that hit you hard because they feel so real. Joju George's Madhuram was a recent such movie, because it reminded me of time when I had to spend a month at a hospital for my father's surgery during COVID-19 second wave. Jeo Baby's The Great Indian Kitchen depicted the woes of the women in our house trapped within everyday patriarchal workings that we are so used to ignore.  Similarly, there are certain moments between Vinu and Asha in Bhoothakaalam, that hit me hard when it reminded me of my own prickly relationship with my mother in my younger days, which was a difficult time for both of us when it comes to understanding each other. When a film does that to you, it is power of how strong the writing is. Ban on Malayalam Actor Shane Nigam Lifted After AMMA Intervenes.

But Bhoothakaalam goes beyond the dynamics of maternal complexities and also deal with subjects that middle-class are too unaware and even scared to recognise - depression and mental trauma. The sequences of Revathy's character dealing with her loneliness and grief are as difficult to watch as Vinu grappling with his mind threatening to let go over not being employed or being a good boyfriend. The first half especially felt like a volcano waiting to explode for me.

Which is also why when Bhoothakaalam takes a sinister turn at the interval point, it may not be digested by some. From thereon, the film puzzles you aplenty as it traverses from psychological drama to straightup horror. There are some scary scenes, with the movie playing well your mind with slow tracking movements and a terrifying sound design, leading to a climax that offers enough chills but felt a bit of a letdown as how it closes out typically of films in such a genre. But till then, it doesn't let go off picking upon Asha and Vinu's equation that feels as scary with its volatile brittleness as the paranormal spooks Vinu believes he is experiencing.

I do have a reason to believe that the 2014 acclaimed Australian film The Babadook has been an inspiration for director Rahul Sadasivan, who had co-written the script with Sreekumar Shreyas. That film also had a mother grappling with the grief of losing her husband and dealing with a difficult son, while being haunted by a spooky entity. There is also a touch of Sibi Malayil's brilliant Thaniyavarthanam in Bhoothakaalam, as well. While the inspirations do hit you, I would rather think the director wanted to bring his own take into them, and he succeeds to a large extent.

Speaking of the performances, Revathy is simply spellbinding! It is a very difficult performance to watch, more so because how easily you can relate to what she is going through, and the actress delivers on every count here, be it in her troubled silences or her anguished outbursts. Shane Nigam has by now nailed how to play a emotionally fragile youngster (to the point that it is becoming a cliche for him). Saiju Kurup is credible enough as the counsellor brought in to check on Vinu and stumbles upon a secret more terrifying.

- The Conclusion is A Little Weak

- Could Be Slow-Paced for Some

- The Inspirations Felt Heavy-Handed at Times

Bhoothakaalam is a slow-burn psychological drama that first makes you uncomfortable with its exploration of depression and grief, before dropping some shivers with its gradual shifting of genres. With terrific performances from Revathy and Shane Nigam, this is a recommended watch, even if the slow pacing may not be everyone's cup of tea. Bhoothakaalam is streaming on SonyLIV.

(The above story first appeared on LatestLY on Jan 21, 2022 01:00 AM IST. For more news and updates on politics, world, sports, entertainment and lifestyle, log on to our website latestly.com).