The upcoming flick Jagame Thandhiram is written and helmed by Karthik Subbaraj and produced under the banner of Y NOT Studios, starring Dhanush in the lead. 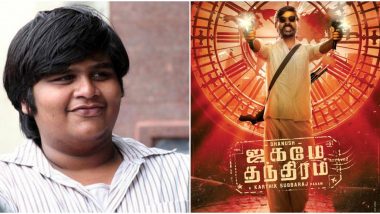 The coronavirus outbreak has majorly affected the entertainment industry. From films getting pushed back to shootings been suspended, the show business is going through a tough time. This outbreak has even made many producers to release their films on OTT platforms. The decision made by the makers did not go down well with many film exhibitors, but seeing the current situation and with no idea by when the cinema halls will be reopened, a direct web release decision was made. There are many south films that are getting direct release on OTT platform and rumours were rife that the makers of Dhanush starrer Jagame Thandhiram are also planning to release the Tamil movie online. But director Karthik Subbaraj has confirmed that Jagame Thandhiram will not skip theatrical release. Jagame Thandhiram: Kollywood Superstar Dhanush Goes All Guns Blazing In This New Poster! View Pic.

The upcoming flick Jagame Thandhiram is written and helmed by Karthik Subbaraj. Produced under the banner of Y NOT Studios, when the makers had released the film’s posters and Dhanush’s look, fans were just waiting to watch him on the big screens. This film was scheduled to be released on May 1, but had to be postponed owing to the COVID-19 pandemic. In an interview to The Hindu, the filmmaker has cleared the air about the release of this action thriller. COVID-19 Outbreak: Jagame Thandhiram Director Karthik Subbaraj Donates Rs 1 Lakh to FEFSI.

When Karthik Subbaraj was asked if it would be a feasible option to release Jagame Thandhiram directly on an OTT platform, he was quoted as saying, “See, Jagame Thanthiram is a theatrical film and it will release in theatres no matter what. It has an ensemble and is a completely different scenario. The whole ‘direct-to-OTT’ release itself is a new concept which has become the ‘new normal’, thanks to the COVID-19 pandemic. But as more audience move to the web space, there will be high return on investment, which will prompt the streaming companies to slowly acquire big stars’ films.” We are sure, fans of Dhanush must be happy to know that Jagame Thandhiram will release directly in theatres!

(The above story first appeared on LatestLY on Jun 18, 2020 09:17 AM IST. For more news and updates on politics, world, sports, entertainment and lifestyle, log on to our website latestly.com).