Kurup is the upcoming Malayalam crime thriller starring Dulquer Salmaan in the lead. DQ would be seen essaying the role of Sukumara Kurup, one of the most-wanted criminals in Kerala. 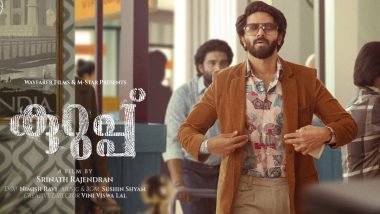 Kurup is the upcoming Malayalam crime thriller starring Dulquer Salmaan in the lead. DQ would be seen essaying the role of Sukumara Kurup, one of the most-wanted criminals in Kerala. Ever since the makers dropped a glimpse of this film, Mollywood lovers have been curiously waiting for the film to be released. DQ would not only be seen in a totally different avatar, but he would be seen in a totally different role as well. Now the latest buzz is about its release. Kurup Sneak Peek: This Video Featuring Dulquer Salmaan As Sukumara Kurup, The Most Wanted Criminal, Is Classy And Massy!

There are several filmmakers and producers who have opted for OTT platforms to release their films. It happened when the theatres in the country and in many other regions across the globe had to be closed down in the wake of coronavirus outbreak. Although many theatres in the country have now opened with 50% capacity, there are still producers who are opting for OTT platforms. And looks like Dulquer Salmaan’s film Kurup would be joining the bandwagon.

According to media reports, Kurup will get a direct online release. The makers have reportedly sold it to a streaming giant for a whopping amount. However, the team has not made any official announcement on it yet. However, Dulquer Salmaan had earlier stated to indianexpress.com that they have no plans to release Kurup on OTT platform, but will have a theatrical release. After Thalapathy 64 Director Lokesh Kanagaraj, Kurup Actor Dulquer Salmaan Urges Fans to Not Leak Pics Online.

Directed by Srinath Rajendran, it was initially scheduled to be released during the time of Eid. However, owing to the ongoing circumstances, the release of Kurup had to be delayed. Bankrolled under the banner of Wayfarer Films, Kurup also stars Indrajith Sukumaran, Sobhita Dhulipala and Shine Tom Chacko in supporting roles.

(The above story first appeared on LatestLY on Nov 23, 2020 04:48 PM IST. For more news and updates on politics, world, sports, entertainment and lifestyle, log on to our website latestly.com).