Kurup Sneak Peek: This Video Featuring Dulquer Salmaan As Sukumara Kurup, The Most Wanted Criminal, Is Classy And Massy!

It is Dulquer Salmaan’s birthday and what better than getting a glimpse of his character Sukumara Kurup from the upcoming crime thriller Kurup. 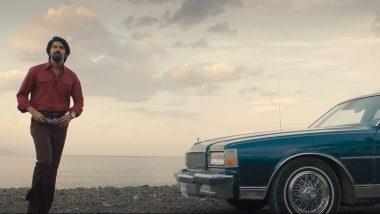 It is Dulquer Salmaan’s birthday and what better than getting a glimpse of his character Sukumara Kurup from the upcoming crime thriller Kurup. This sneak peek from Kurup featuring DQ in his character is indeed the perfect birthday treat for all fans of Dulquer. This video is classy and massy! Giving vintage vibes, featuring DQ in a retro avatar, this upcoming movie already has our attention, leaving us excited to watch it on the big screen. Kurup: Dulquer Salmaan Drops an Eid Treat For His Fans As He Shares His Stylish Second Look from the Film On Its Pre-Coronavirus Release Day!

The video opens to a thrilling background score, featuring Dulquer Salmaan as Sukumara Kurup, the most wanted criminal, smoking a cigarette by facing the sea with his voice-over that means, “That one thing is for sure, I will decide who wants to see me, be it the police or politicians.” Directed by Srinath Rajendran, this is the story of the country’s longest wanted fugitive and it is ‘Conning Soon’. Dulquer Salmaan Birthday: Prithviraj Sukumaran, Saniya Iyappan, Aju Varghese Wish Mollywood’s Hunk On His Special Day!

Watch Below The Sneak Peek Of Kurup:

Kurup is based on the true story, the mas who was accused in the murder of a film representative named Chacko, and this character would be played by Tovino Thomas. Indrajith Sukumaran, Sobhita Dhulipala and Shine Tom Chacko would also be seen in this upcoming flick that is produced under the banners of Wayfarer Films and M Star Entertainments. The film’s release date is yet to be announced.

(The above story first appeared on LatestLY on Jul 28, 2020 11:26 AM IST. For more news and updates on politics, world, sports, entertainment and lifestyle, log on to our website latestly.com).