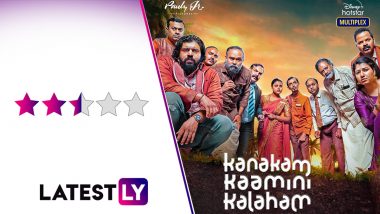 What will that talk be? it would be whether Kalakam Kamini Kalaham is a good movie or not! For this movie is guaranteed to bring in diverse reactions. Some are bound to call it a brilliant comedy not adapt for the usual tastes. Some might call it a comic experiment that never capitalises its full potential.

Now which camp do I belong to?

Before I get into that, let's talk about the plot. When we meet Pavithran (Nivin Pauly, also the producer) and Haripriya (Grace Antony) first, their 2.5 year old  marriage is already on the rocks. Haripriya, a former TV actress, is annoyed that her husband, a junior artiste and a self-made acting school instructor, is neither responsible nor romantic. To mend bridges and repair their marriage, he buys her gold earrings (to compensate for the earrings he lost of hers), and to hide the discrepancies carried out in that sale, takes her to a hotel in Munnar to appease her.

It is in that hotel where we meet the rest of the madcap roster. And it is at this very hotel, where Haripriya loses her earrings and the chaos descends down in the hotel, as everyone from the frustrated hotel manager Joby (Vinay Forrt), to the irked receptionist Shailini (Vincy Aloshious) to the pervy hotel boy Manaf (Rajesh Madhavan) are all under the needle of suspicion. In the midst of all that, the problems between a misogynistic Pavithran and Haripriya also begin to unravel in front of the onlookers.

Kanakam Kamini Kalaham, or its very offensive acronym KKK, is different, and that's exactly is its calling card. From its making to its screenplay, the movie isn't bound to the usual rules of a commercial film, that too a comedy. It has the feel of a well-staged play, allowing the characters to interact within a given space and throwing them in chaos till we wait for the next bell. The quirky intro title sequence should have given hints about that.

I can't deny that there are some very smart influences in there. A small boy riding a tricycle down the red carpet a la The Shining foresees the utter mess the hotel will turn into. The production design and the assorted characters that we meet at the Hilltop Hotel had a feel of a Wes Anderson film, namely The Grand Budapest Hotel. A vase is broken over a drunkard's head leaving a plant and its earth on his hair. Geddit? He is vellam and the plant needs Earth and water to survive. No? Then you most probably won't get most of the jokes here. Nivin Pauly Birthday Special: From Premam to Moothon, 7 Best Films of the Popular Malayalam Star Ranked Per IMDb and Where to Watch Them Online.

I was agreeable to the dynamic between the married lead couple, that threatened to get into The Great Indian Kitchen territory. I was rooting for Haripriya, the far more successful in the field than her partner, to throw the water in the flush in the end at the insufferable Pavithran, though that, sadly, never happened.

All the actors do well with the material they are given and most of them are given enough space to impress. So much that Nivin Pauly (looking bulkier than usual) has to take a backseat at times and comes out as the least interesting performer. Among the supporting cast, Vinay Forrt, Vincy Aloshious and Rajesh Madhavan stand out. Jaffer Idukki's character begins to grate your nerves after a certain point. It could be deliberate since that's exactly what he does to the rest of the characters in the film, but should the viewer be also incessantly annoyed? Sudheesh, Joy Mathew, Sivadas Kannur, Sudheer Paravoor all do good in their roles.

But if there is one actor that left me the most impressed, it would be Grace Antony. After a strong showing in the underrated but beautiful Halal Love Story, Grace continues to impress with her immaculate expressions and dialogue delivery. She is the true star of the show.

So did Ratheesh score another heart from me with his sophomore effort? As much as I love Wes Anderson movies. As much as I love the entire cast here. As much as I am becoming a bigger and bigger fan of Grace, Kanakam Kamini Kalaham didn't get to me much. I did laugh here and there, but most of the proceedings, I was wondering what the heck is going on around and why are the gags being needlessly stretched to the point of being boring. The madcap premise felt trying hard to look both smart and silly, and the balancing attempt made the film look half-baked at best.

Maybe it was the vestiges of a hotel management student remaining in me, but I was also curious as to which hotel staff would behave with the guests so rudely that too without provocation, no matter if it was their time of the month or that they aren't being paid salaries. Maybe I need to have not used my brains here, but KKK also brought in jokes that made me use those. Also, it is difficult to laugh when a woman is being sexually assaulted, and then more so, when the scene ends with some damp twist (Also, I am not sure how the woke would react to the one Muslim character being shown a lech and a polyandric, despite the self-aware jokes made on him). In the end, I began to judge my own sense of humour, and begin think if I was being too critical because it is in my own language. But I can't help it that I am watching a comedy that is leaving me bemused instead of amused, despite the absurdity of the situation and whimsicality of the characters.

- Some of the Humour

- Not all the Humour Land Well

Kanakam Kamini Kalaham brings a different perspective and making to the genre of comedy in Malayalam cinema. It has its moments, some really funny ones, but it will definitely divide the audience, with one section calling it a laudable 'different' attempt and other, a failed comedy. As for me, all I want to say is that 'different' also produces average results! Kanakam Kamini Kalaham is streaming on Disney+ Hotstar.

(The above story first appeared on LatestLY on Nov 12, 2021 03:55 AM IST. For more news and updates on politics, world, sports, entertainment and lifestyle, log on to our website latestly.com).