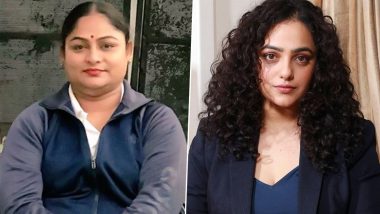 Ever since the announcement was made, movie buffs have been curious to know which actress would be playing the Olympic medal winner’s role. Malayalam actress Nithya Menen’s started doing rounds on the internet. As per a report in The Hans India, the makers were considering to rope in Nithya Menen for the role, but she turned it down. The actress has not made any comment on it yet. Maidaan: The Shooting of Ajay Devgn's Sports Biopic Won't Resume Until November, Confirms Producer Boney Kapoor.

On her birthday today, we proudly announce our next, a biopic on @kmmalleswari, FIRST Indian woman to win a medal at Olympics. A multilingual PAN Indian movie! #HBDKarnamMalleswari

There are many other names also doing round and that includes Bhumi Pednekar, Rakul Preet Singh and Taapsee Pannu. The makers are yet to announce the details of the cast for Karnam Malleswari biopic, directed by Sanjanaa Reddy. Stay tuned for further updates from the world of entertainment.

(The above story first appeared on LatestLY on Jun 03, 2020 01:27 PM IST. For more news and updates on politics, world, sports, entertainment and lifestyle, log on to our website latestly.com).