And based on these disclosures, the police probe team registered a fresh case and Dileep sensing that he might be arrested sought anticipatory bail and on that petition on Tuesday for the third time was shifted and it will now be heard on Friday. 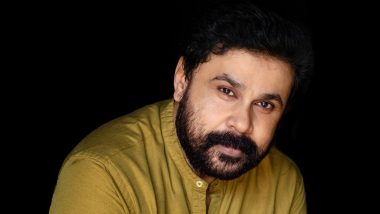 The Kerala High Court on Tuesday asked the State Police Chief to enquire into the allegations raised by actor Dileep that the media was flouting the trial court's order restricting the publication of matters related to the 2017 actor assault case till the conclusion of the trial. Kerala High Court Defers Dileep’s Anticipatory Bail Plea Hearing in Malayalam Actress Assault Case to January 21.

Dileep is an accused in the actress abduction case and after being in jail for several weeks he got bail and when the trial in the case was in the last lap, early this month a film director Balachandra Kumar, also a friend of the actor made fresh statements related to the case by giving an interview to a TV channel here, landing the actor in deep trouble. Dileep’s House In Aluva Faces Police Raid After New Allegations Resurface Against Actor In Malayalam Actress Sexual Assault Case.

Hearing the actor's plea the Court said that the allegations if found to be true, should be handled with prompt action as prescribed by law. The State challenged the maintainability of the petition and further argued that there was an alternate remedy available to the petitioner before the trial court.

To this, the actor's counsel said that due to the lack of a Prosecutor at the trial court for this case, the matter was not making any progress and that it is merely getting adjourned. Dileep's grouse was that as soon as trial commenced in the case, media houses started publishing parts of witness depositions, which according to him, was a misrepresentation of facts deposed by the witnesses.

According to the actor, such publication was made at the instance of the investigating officer. The Court also issued notice to the TV channel which had aired the interview and posted the matter after three weeks. Kumar's revelation was that Dileep soon after being released on bail saw the visuals which showed the beleaguered actress who was kidnapped being physically attacked by her tormentors, while she was abducted.

Until this time it was only the trial court which had seen this. and by now Kumar who made this and more disclosures has testified before the police and also a magistrate. And based on these disclosures, the police probe team registered a fresh case and Dileep sensing that he might be arrested sought anticipatory bail and on that petition on Tuesday for the third time was shifted and it will now be heard on Friday.

(The above story first appeared on LatestLY on Jan 18, 2022 08:29 PM IST. For more news and updates on politics, world, sports, entertainment and lifestyle, log on to our website latestly.com).