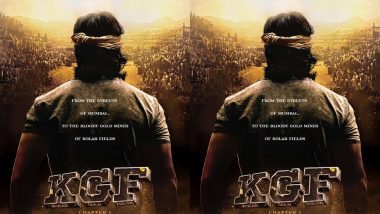 Did anyone expect a Kannada film, that no Bollywood fan heard of a couple of months back, would threaten to steal the glory of a Shah Rukh Khan film? That's KGF for you. We mean, KGF Chapter I. Divided into two parts, the movie is being released in multiple languages including Hindi, Tamil and Malayalam. Yash is playing the lead in the movie, that is directed by Prashanth Neel. KGF is being promoted in Bollywood by Farhan Akhtar's Excel Entertainment, who is expecting to eke a Baahubali like victory from the film. We' re watching KGF right now and here's what we think of the first half. KGF Chapter I Song Salaam Rocky Bhai: All Hail Yash's Stylish Anti-Hero As He Swaggers Through The Mindless Violence - Watch Video.

"The movie begins with an author telling a disbelieving journalist in the present day about what he calls El Dorado in India - Kolar Gold Fields and the saga surrounding them. When the mines were discovered in 1951, it was also the day when the hero Rocky was born to rule what he sees. Having lost his parents at an early age, Rocky goes to Bombay and makes a name in the gangs. When he grows too big to be handled there, Rocky is assigned to Bangalore to kill a big fish. There he discovers love and also the directions to his future kingdom.

The first half is gloriously violent with scenes set up to celebrate the machismo of leading man. If you are expecting a realistic saga like Gangs of Wasseypur, you might be disappointed. It feels like a typical one-man show set in a large setup, that we usually seen in South cinema. Of course, there are some whistle worthy scenes, but the fast editing ruins some of the impacts. The movie reaches the interval point when the hero gets his first setback which makes him decide to take the battle to KGF. Looking forward to more of violence and bravado in the second half."

(The above story first appeared on LatestLY on Dec 21, 2018 11:20 AM IST. For more news and updates on politics, world, sports, entertainment and lifestyle, log on to our website latestly.com).