Liger is a pan-Indian project starring Vijay Deverakonda and Ananya Panday in the lead. The makers are all set to announce the theatrical release date of the film on February 11. 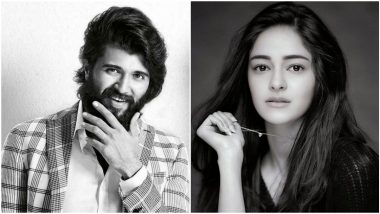 Liger is a pan-Indian project starring Vijay Deverakonda and Ananya Panday in the lead. Fans would not just get to see a new onscreen pair, but also enjoy the film in five languages, including Telugu and Hindi. Directed by Puri Jagannadh, the theatrical release date of the film will be announced tomorrow, February 11. There have been several films that could not opt for theatrical release due to coronavirus lockdown and instead zeroed down on OTT platforms. But Liger is definitely going to hit the big screens and it’s a bonanza amid pandemic as the I&B ministry recently confirmed that the theatres, multiplexes and cinema halls can run at 100% occupancy. LIGER: Karan Johar Shares Vijay Deverakonda's First Look as a Fierce Boxer in Puri Jagannadh Film.

Ananya Panday would be making her debut in Telugu Cinema with Liger. Talking about her character in the film, she had told Mirror, “My character is quite like the real me. I think young girls will be able to relate to her cute, funny and charming personality. I am working on my Telugu too, learning a few words every day on the set. I will try to dub for myself in as many languages as possible.” I&B Ministry Permits 100% Occupancy in Theatres and Cinema Halls From February 1, Issues New SOPs To Contain Spread Of COVID-19.

Vijay Deverakonda would be seen playing the role of kickboxer in the film and we did get to see his look when the makers had released the poster. It is also said that his character in Liger would be seen with a speech impediment. Liger is jointly produced under the banners of Dharma Productions and Puri Connects.

(The above story first appeared on LatestLY on Feb 10, 2021 01:02 PM IST. For more news and updates on politics, world, sports, entertainment and lifestyle, log on to our website latestly.com).