Maara, starring R Madhavan and Shraddha Srinath, is a remake of the Malayalam film Charlie that featured Dulquer Salmaan and Parvathy. The makers have released the film’s trailer and we bet, it will make you believe in fairytale. 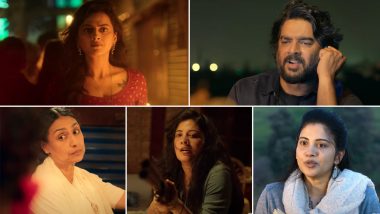 Maara, starring R Madhavan and Shraddha Srinath, is a remake of the Malayalam film Charlie that featured Dulquer Salmaan and Parvathy. Maara, the Tamil film, is a remake of this romantic drama. The makers have released the film’s trailer and we bet, it will make you believe in fairytale. Directed by newcomer Dhilip Kumar, this upcoming film is filled with love, hope and warmth. Maara: Post-Production of R Madhavan and Shraddha Srinath Starrer to Commence Soon, Confirms Team (Read Statement).

R Madhavan plays titular role whereas Shraddha Srinath plays the character Paaru. The trailer highlights how the latter gets intrigued towards the beautiful paintings and sketches in her new apartment. She then finds decides to find out the person who has done all the beautiful artwork. From the performances to the picturesque locales, Maara promises to be a feel good film.

Watch The Trailer Of Maara Below:

Talking about the film, R Madhavan stated, “Maara extends from being a person to a world filled with pleasant people. The incidents and conversations these people have are grounded yet the experiences they have are surreal, and that makes the audience an interesting part of the ensemble. The role of my character has been crafted with foremost importance given to the honesty in the relationships he shares with others. And that trait makes the person as somebody that the audience falls in love with instantly,” reports Asianet Newsable.

The film’s music and background score was composed by Ghibran. Maara, produced under the banner of Pramod Films, is all set to be premiered on Amazon Prime Video on January 8, 2021.

(The above story first appeared on LatestLY on Dec 29, 2020 02:15 PM IST. For more news and updates on politics, world, sports, entertainment and lifestyle, log on to our website latestly.com).