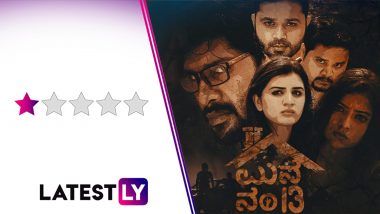 Mane Number 13 Movie Review: What happens when you have seen too many horror/slasher films and want to do something on your own, only to realise that you keep writing yourself in the corner? You get something as absurd as Mane Number 13 (House No 13). Written and directed by Vivy Kathiresan, this Kannada horror film made its way to Amazon Prime's increasing gallery of disappointing buyouts. This one is a total washout, filled with repetitive ho-hum scares, absurd scenes and total lack of logic. OTT Releases Of the Week: ZEE5’s Naxalbari, Andhaghaaram on Netflix, Manne Number 13 on Amazon Prime and More.

Five IT colleagues - Nishok (Ramana), Nancy (Varsha Bollamma), Preethi (Aishwarya Gowda), Karthick (Praveen Prem) and Aswanth (Sanjeiv) - are also roommates and good friends. When they have a tiff with their landlord, Nishok decides to move them out to a new rented house. And his search ends at House No 13, a desolate bungalow with a haunted reputation.

Despite Karthick's apprehensions, they all move into the new house. But on the very same night, terrible things begin to happen to each of them, including people getting killed gruesomely. Is it really the handiwork of a ghost? Or has it something to do with a horrific incident from their past, and someone has returned to seek revenge?

Mane Number 13 is inspired from a bloody lot of films, I Know What You Did Last Summer, April Fool's Day and Annabelle (There is a dirty old spooky doll for some extra chills), getting the big stakes here at inspirations. One of the actors had said in an interview that the film will remind you of The Conjuring. I believe that Annabelle would herself go to self-retirement seeing how Mane Number 13 goes about destroying the scary movie business.

The worst part about Mane Number 13 is not its many inspirations or that it follows a tired slasher template. Or that nearly every single scare is perfunctory and terror-free. The worst part of this film that it dares to take our intelligence for a ride. Middle Class Melodies Movie Review: Anand Deverakonda, Varsha Bollamma’s Film Blends Romance, Food and Humour to Serve a Good-Natured Entertainer.

The screenplay is devoid of any damn logic, as the film is confused about whether it wants to be a horror film or a mystery thriller, or both, and in being so, screws up both the genres. Even the characters behave the same way. Like for example, some of the main characters plays a huge scary prank on one of their roommates (don't even ask how they manage to pull off the series of scary tactics that need some superhuman skills). But they conveniently forget the many spooky incidents they themselves experienced just moments before, that doesn't involve their intended 'victim' in the scene.

The film is also confused about its tone, at times light-hearted only to be bloody serious later. For nearly two-thirds of Mane Number 13, I thought it was to be a horror-comedy, before I realised the humour was unintentional. not served by the sub-par acting on display. But the young actors can't be blamed when even Daniel Day-Lewis can't do much with the kind of inane writing served here.

The most WTF aspect of the film, though, is its nonsensical climax. Again being consistent in not standing out from the rest of the illogical mess, instead of neatly solving the mystery, It also befuddles the viewer by changing established scenes just for the sake of some silly twists. (SPOILERS AHEAD). Like, the prologue scene at the start of the film shows a grisly murder shown in a way where four of the main characters are clearly guilty. But when there is a callback to the same in the climax, we are seen a different version of the same sequence altogether! That's some juvenile stupidity there!

Even technically, Mane Number 13 can't be saved, with a camerawork that feels like we are seeing a student film, and editing whose only credit is that it contains the mess within two hours.

Mane Number 13 is a silly film that tries to spook us with cheap scares, befuddle us with silly twists and leave us groaning with some bad writing, acting and direction. Watch it on Amazon Prime Video at your own risk!

(The above story first appeared on LatestLY on Nov 26, 2020 12:06 AM IST. For more news and updates on politics, world, sports, entertainment and lifestyle, log on to our website latestly.com).