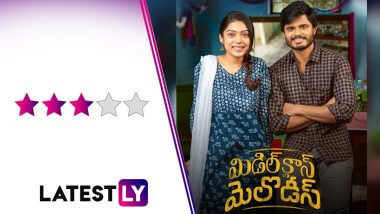 Middle Class Melodies Movie Review: Debutante Vinod Ananthoju's Telugu film Middle Class Melodies doesn't boast of any mass-appealing kinks. Nor does it aim for any groundbreaking narrative. It is very leisurely paced, often making you question where the plot, if any, is heading towards. But Cinema doesn't really need to be about innovative storylines and mass-punch scenes. Sometime good movies can be merely about moments, and that's where Middle Class Melodies mostly hit all the right notes. Middle Class Melodies Trailer: Anand Deverakonda and Varsha Bollamma's Upcoming Telugu Drama Will Strike a Chord With Every Common Man.

Raghava (Anand Deverakonda) runs the tiffin centre of his father (Goparaju Ramana) in his village, but he desires to start a hotel of his own in Guntur (you can play a drinking game about the number of times someone takes the town's name in the film). Raghava is proud of his 'Bombay Chutney' and that's enough to make him confident about moving to the city, much to the annoyance of his disgruntled father.

He is also still in love with Sandhya (Varsha Bollamma), his former schoolmate and a relative's daughter, who lives in Guntur. Her father (Prem Sagar), oblivious of their mutual feelings, offers him a shop he owns at low lease rate. Whether Raghava manages to have his successful venture and also marry Sandhya is what his storyline is about.

But Middle Class Melodies isn't just about Raghava and Sandhya, the latter dodging her father's stubborn attempts to get her married to a guy of his choice. It is about about Raghava's best friend Gopal (Chaitanya Garikipati), who is obsessed with horoscopes, and has a liking for a mobile-shop sales girl Gautami (Divya Sripada), who has her own set of problems at her home. There is also a thread of a chit fund company going bust in the village, leaving the impoverished villagers in a lurch.

Even though there are many opportunities for the film to do so, what's likeable about Middle Class Melodies is that it doesn't go heavy when it comes to both humour and emotions. The humour is subtle and still funny, despite the presence of some loud characters. The drama doesn't go overboard even when the leads are stuck heavily in their romantic dilemmas, or when Raghava has his restaurant troubles. The movie doesn't even harp heavily even on victories that come across later in the film, instead phasing on to the next situation. Vijay Deverakonda Shares A Perfect Family Picture On The Festive Occasion! South Hunk Says, ‘I Had A Mad Good Diwali’.

Vinod's victory as a storyteller, however, is precisely for this reason. He lets the characters and the situations define out how they want to play out the mood. Not every time it works out, like for example, the chit fund company track could have have been developed better. But even that weak track offers a couple of nice moments of humaneness, and that's what Middle Class Melodies aims to be about - bitter-sweet middle class emotions, served with some nice romance and enough culinary flavours.

As for the performances, the entire cast is on a roll here. Anand Devarakonda might deliberately not going for the flair that his elder brother is known for, but he is very natural as the boy-next-door, an unlikely hero in very normal situations, never getting carried away with expressions and emotions. Varsha Bollamma is likeable as the level-headed Sandhya, particularly standing out in the scene where she desperately seeks to put recharge in her phone (though why she doesn't do so online fails to grasp me. I did see smartphones around).

Chaitanya Garikipati is really good as the confused bestie. I wished the film offered more scope to Divya Sripada's character; she was so good in her role. Goparaju Ramana and Prem Sagar both entertain in their characters of egoistic fathers.

- A Couple of Threads are Weak, Also Takes Time to Start Off

(The above story first appeared on LatestLY on Nov 20, 2020 12:25 AM IST. For more news and updates on politics, world, sports, entertainment and lifestyle, log on to our website latestly.com).