Miss India starring Keerthy Suresh in the lead role has finally been premiered on the streaming giant Netflix on November 4. 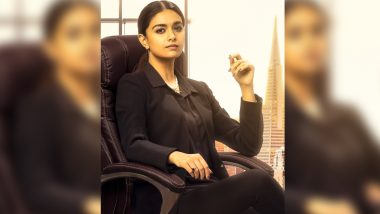 Miss India starring Keerthy Suresh in the lead role has finally been premiered on the streaming giant Netflix on November 4. Directed by Narendra Nath, this film revolves around the life of a simple girl named Samyuktha, who hails from a middle class family, but has dreams of becoming a successful entrepreneur after pursuing her MBA. We did get to catch a glimpse of her journey of building her empire, a chai business in a foreign country, although her family is not convinced with her ideas. The trailer of Miss India did leave fans impressed and the expectations were sky-high. However, the reviews of Miss India that are doing rounds, show that critics are disappointed with this newly released movie and have labelled it as a bland tale. Miss India Movie Review: Keerthy Suresh’s Netflix Film Brews an Uninspiring Tale From a Bland Recipe!

Keerthy Suresh is a National Award-winning actress and fans have sky-rocketing expectations from her films. Miss India is her 20th project and many expected it to be something different. Let’s take a look at what critics have said after watching Miss India. Miss India Trailer: Keerthy Suresh’s Netflix Film Gives Us Glimpses Of A Simple Girl Who Aspires To Become A Successful Entrepreneur (Watch Video).

Firstpost - The storytelling is so bland that you almost empathise with the fate of the actors delivering their lines without an iota of interest or verve. They all needed a strong cup of chai. Or at least an Americano, even from Miss India’s arch rival KSK company, to keep themselves awake. The actor who suffers the most from this sort of a fatigue is Keerthy Suresh herself. There is so much she wants to say through the character, and she puts up a brave front several times.

Times of India - Narendra Nath gets all the slow-motion entries for Keerthy right, unfortunately that’s all he gets right. But it is Thaman’s background score and music (especially Naa Chinni Lokame) that makes these scenes work, more than anything else. Keerthy Suresh manages to shoulder a film, but sadly there’s only so much her and her swagger can do when she's let down by poor writing.

The News Minute - You have to feel for Keerthy Suresh. After a series of disappointing films where she played the loosu ponnu, Keerthy made a strong statement with Mahanati. However, the actor is still struggling to find roles that prove her mettle. In Miss India, her character is meant to be determined and intelligent, but considering she's an entrepreneur who organises an elaborate event to catch investors and customers but has not even thought of her brand name, that is a tough ask.

123Telugu - The story on paper looks good but the execution of the film is below par. The writing is so weak that most of the actors do not have depth in their characters. The film lacks a basic conflict point. Even though the director sets up good scenes between Keerrhy Suresh and Jagapathi Babu, there is no major conflict between them to fight.

So that’s what the critics have to say about the performances, narration, music and direction of Miss India. Besides Telugu, the film has also been released in dubbed versions, Tamil and Malayalam. Miss India is currently streaming on Netflix.

(The above story first appeared on LatestLY on Nov 04, 2020 02:09 PM IST. For more news and updates on politics, world, sports, entertainment and lifestyle, log on to our website latestly.com).