Nandamuri Balakrishna celebrates his birthday today and on this occasion, we thought we will tell you about the history he created. The actor featured in India's first time-travel movie Aditya 369 back in 1991. It was about a dystopian post-apocalyptic world that has been ravaged by World War 3 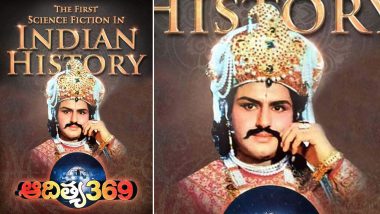 Nandamuri Balakrishna celebrates his birthday today and on this day, we would like to talk about a movie that created history, Aditya 369. There's so much epicness attached to this Telugu movie. It is the first sci-fi time travel film made in Telugu. In fact, it was the first Indian sci-fi movie ever! The music was by the stupendous Ilayaraja and was presented by the later SP Balasbrahmanyam. If that's not enough, the star cast had names like Amrish Puri, Tinnu Anand, Silk Smitha and others. SPB had dubbed for Tinnu Anand in the film. Akhanda Teaser: Nandamuri Balakrishna’s Fierce Avatar Gets Amped Up By A Pulsating And Addictive Music (Watch Video)

As per Times Of India, Aditya 369 was made with a budget of Rs 1.6 crore and earned Rs 9 crore. The film was dubbed in Tamil as Apoorva Sakthi 369 and in Hindi as Mission 369. It dealt with time travel, much like the Back To The Future movies. Nandamuri Balakrishna Birthday: 5 Films Of The Telugu Cinema Superstar That You Cannot Afford To Miss!

Behind the scenes of #Aditya369 pic.twitter.com/ERHinwuqJY

Aditya 369 is about a dystopian post-apocalyptic world that has been ravaged by World War 3. You can watch the movie on YouTube and MX Player.

(The above story first appeared on LatestLY on Jun 10, 2021 08:40 AM IST. For more news and updates on politics, world, sports, entertainment and lifestyle, log on to our website latestly.com).