Tollywood superstar, Nandamuri Balakrishna who is popularly known as Balayya celebrates his 60th birthday on June 10, 2020. And the actor celebrated this day by doing a great deed. Check it out. 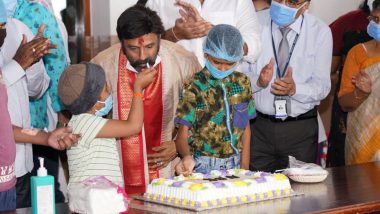 Tollywood superstar, Nandamuri Balakrishna who is popularly known as Balayya celebrates his 60th birthday on June 10, 2020. Right from the start of the day, fans are in no mood to keep calm down and have been wishing the star on social media. Not just fans, the actor's industry pals like Mahesh Babu, Chiranjeevi, Jr NTR and more have also wished the megastar on his birthday. But that's not it, as the highlight of the day are the latest pictures of NBK doing rounds on the internet which sees him at Basavatarakam Indo American Cancer Hospital along with the kids. Indeed, a great way to kickstart one's birthday. Nandamuri Balakrishna Turns 60 Today! Jr NTR Extends Heartwarming Birthday Wishes To The Tollywood Superstar On Twitter (View Post).

In the photo, we can see Balakrishna bringing a smile on the children faces by cutting a cake with them. Also, in the picture, the Telugu star can be seen adhering to the guidelines and wearing a mask and also maintaining the required social distance. Reportedly, many fans gathered outside the hospital to catch a glimpse of the birthday boy. Must say, a special day spent well with special kids. Nandamuri Balakrishna Birthday: 5 Films Of The Telugu Cinema Superstar That You Cannot Afford To Miss!

Check Out Nandamuri Balakrishna's Picture Below:

Nandamuri Balakrishna celebrating his Birthday with Kids in Cancer hospital 😍

Here Are Some More Pics:

Hashtag #HappyBirthdayNBK has been trending on Twitter on the occasion of the star's birthday. Also, it was on his birthday, when the makers of his next unveiled the first look poster of his film, 106 NBK and it has received a thunderous response from fans. Coming back to the above pics, they are priceless. Stay tuned!

(The above story first appeared on LatestLY on Jun 10, 2020 02:09 PM IST. For more news and updates on politics, world, sports, entertainment and lifestyle, log on to our website latestly.com).