On the occasion of Nandamuri Balakrishna’s 60th birthday, from family to industry members to fans, all are extending lovely birthday wishes to the veteran actor across social media platforms. 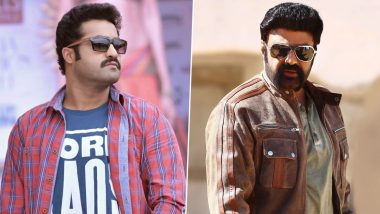 Nandamuri Balakrishna celebrates his 60th birthday on June 10, 2020. The superstar of Telugu Cinema was born to NT Rama Rao and Basavatarakam. He had made his acting debut in the Telugu film industry as a child artist and by mid-80s he was roped in films to play lead roles. At a very young age Balakrishna earned popularity among the masses and became one of the most sought after actors of Tollywood. Nandamuri Balakrishna Birthday: 5 Films Of The Telugu Cinema Superstar That You Cannot Afford To Miss!

Fans have been using the hashtag #HappyBirthdayNBK to wish Nandamuri Balakrishna on the occasion of his 60th birthday. From sharing vintage stills to other mass moments from Balakrishna’s films, fans are showering love and good wishes for the actor across social media platforms. On the eve of his birthday, the makers of his upcoming flick, NBK 106, released his first look from the film and it was indeed the best treat that fans could receive on this day. Here’s wishing Nandamuri Balakrishna a very happy birthday!

(The above story first appeared on LatestLY on Jun 10, 2020 08:48 AM IST. For more news and updates on politics, world, sports, entertainment and lifestyle, log on to our website latestly.com).