Nandamuri Balakrishna Birthday: 5 Films Of The Telugu Cinema Superstar That You Cannot Afford To Miss!

The veteran actor of Telugu Cinema, Nandamuri Balakrishna, celebrates his 60th birthday today. On this special day, let’s take a look at those films of the superstar are a must watch. 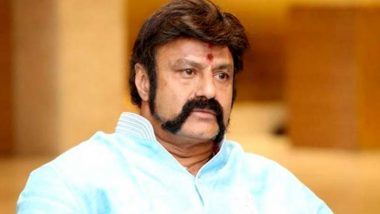 The veteran actor of Telugu Cinema, Nandamuri Balakrishna, celebrates his 60th birthday today. He was born to Telugu matinee idol and former Andhra Pradesh CM, legendary actor NT Rama Rao and Basavatarakam. It was in his early teenage that Balakrishna stepped into the world of cinema. He worked as a child artist and by mid-80s, he managed to bag lead roles in films. Very soon he even became of the most loved and one of the most sought after actors of Tollywood. NBK 106 First Look Starring Nandamuri Balakrishna to Be Released on the Eve of Superstar’s Birthday; Fans Trend #BB3Roar on Twitter.

On the occasion of superstar Nandamuri Balakrishna’s 60th birthday, from family to industry pals to fans, all have been showering him with good wishes across social media platforms. In fact, on the eve of his birthday, the makers of NBK 106 even released the actor’s first look from the film and that was the best treat that his fans could get. This film would mark the third time collaboration between Balakrishna and director Boyapati Srinu, and hence it is called #BB3. On this special day, let’s take a look at those films of the superstar are a must watch. NBK 106 First Look Teaser: Nandamuri Balakrishna's Badass Action Avatar is the Perfect Treat for Fans Ahead of the Superstar's Birthday (Watch Video).

In 1991, Singeetam Srinivasa Rao directed the film Aditya 369 in which Nandamuri Balakrishna was seen playing dual roles - Srikrishnadevaraya and Krishna Kumar. For the unversed, Aditya 369 was the only science fiction film in Tollywood during that period of time and it is also one of the biggest hits of the superstar.

Nandamuri Balakrishna played the titular in this film, directed by B Gopal. It became the highest-grossing Tollywood flick of all time. Its record was broken by Indra that starred Megastar Chiranjeevi in the lead. This blockbuster film was was remade into Tamil as Ezhumalai.

Simha is an action film directed by Boyapati Srinu. This movie again featured Nanadamuri Balakrishna in a dual role, as father and son. It went on to become the highest grosser of 2010 in Telugu Cinema.

The 2017 film Gautamiputra Satakarni was Nandamuri Balakrishna’s 100th film and it was as an epic historical drama. Balakrishna played the titular role. His character was based on the life of second century AD Satavahana ruler.

Nandamuri Balakrishna has given us numerous hits over the years. He has entertained and left the audience enthralled by portraying various roles. Now all eyes are on his upcoming project that is tentatively titled as NBK 106! Here’s wishing the superstar of Telugu Cinema a very happy birthday and a wonderful year ahead.

(The above story first appeared on LatestLY on Jun 10, 2020 12:01 AM IST. For more news and updates on politics, world, sports, entertainment and lifestyle, log on to our website latestly.com).