Nithiin's acting was loved by everyone and 9 years later, he has become one o the top most actors in the South industry. He has given films like Dil, Sambaram, Sri Anjaneyam, Sye, Dhairyam, Agyaat, Seeta Ramula Kalyanam and more. 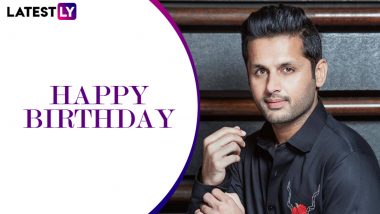 Indian actor and producer Nithiin has made a mark in the Telugu film industry and is one of the top actors currently. His films are always something fans are eagerly waiting for who love him for the versatile roles that he essays on the screen. Born to the producer, Sudhakar Reddy, Nithiin kickstarted his career with the movie Jayam in 2002 after director Teja discovered him during a film screening. He found Nithiin as the perfect fit for his film and after enquiring about Nithiin's interest in acting, he got him aboard for the movie. Rang De To Arrive On Holi 2021! Nithiin And Keerthy Suresh’s Film To Release In Theatres On March 26.

Nithiin's acting was loved by everyone and 9 years later, he has become one o the topmost actors in the South industry. He has given films like Dil, Sambaram, Sri Anjaneyam, Sye, Dhairyam, Agyaat, Seeta Ramula Kalyanam and more. The actor was last seen in Bheeshma and has three films lined up for release including Check, Rang De and Maestro.

Today, the actor is celebrating his 38th birthday and to celebrate his special day, we decided to take a look at some of his best movies. From Sye to Courier Boy Kalyan, he has been a part of some really amazing film and here are 5 of his best work. Take a look:

Sye is an Indian Telugu-language sports film which was directed by S. S. Rajamouli. The film saw Nithiin essay the role of a rugby player who joins hand with his enemy to win back the ground that they used to play at from a local goon. The film is filled with adrenaline and the actor's character is quite lovable and impressive in this film.

Directed by Premsai, Courier Boy Kalyan saw Nithiin romance Yami Gautam. The story revolved around how our courier boy Nithiin gets involved in a huge illegal drug scandal and makes sure that he tells the world the truth about this doctor, who is prescribing medicines that cause a miscarriage. He eventually becomes a courier boy to woo Yami but ends up getting the doctor to prove guilty.

Jayam is a romantic action drama film written, produced and directed by Teja. The film marked Nithiin debut in the film where we saw him essay the role of a poor person who does small jobs to support his single mother and pay the moneylender. He falls in love with a girl, who is already set to marry another guy. The film then shows us how he wins her after many fights and saves her from a bad marriage. Nithiin and Shalini Tie the Knot in Hyderabad! Pics from the Tollywood Couple’s Wedding Ceremony Hit the Internet.

Directed by Eeshwar and starring Nithiin and Hansika Motwani in the lead roles, Seetha Ramula Kalyanam was a hit amongst the audience. Nithiin essayed the role of a daredevil youth, a fearless boy, who falls in love with Hansika. He tries to make her realise how much he loves her and succeeds later in the film only to be separated from her. The families of the two dont agree to their union and hence Nithiin has to go through a lot of trouble to marry her.

Written, directed and produced by Puri Jagannadh, Heart Attack stars Nithiin, Adah Sharma in lead roles with Nicole Amy Madell in an extended cameo appearance and Vikramjeet Virk as the antagonist. His character, Varun is a hippie kind of a person who loves to wander all over the world. He does not believe in love until he meets Adah in Spain. There is another side story where Nithiin fights a drug racket owner in order to win Adah's love and makes for quite an engaging story.

Nithiin is a very talented actor who has entertained us to the fillest. We hope to see more and more of him on the screen. Join us in wishing him a very happy birthday.

(The above story first appeared on LatestLY on Mar 30, 2021 08:10 AM IST. For more news and updates on politics, world, sports, entertainment and lifestyle, log on to our website latestly.com).