Nizhal: Kunchacko Boban And Nayanthara Team Up For A Malayalam Movie!

The upcoming Malayalam movie has been titled as Nizhal and it would be helmed by state award-winning editor Appu N Bhattathiri. 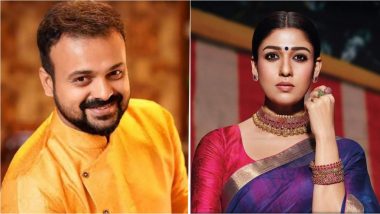 The last Malayalam movie in which Nayanthara was seen as the female lead was in Love Action Drama in which she was paired opposite Nivin Pauly. Widely known as Lady Superstar of Kollywood, this gorgeous actress is all set to do another Malayalam movie and this time she would be sharing screen space with the charming Mollywood star Kunchacko Boban, who was last seen in the hit film Anjaam Pathiraa. Although the two have worked together in a film in the past, titled Twenty:20, this will be the first time that would be seen together. CONFIRMED! Kunchacko Boban Starrer Anjaam Pathiraa To Be Remade In Hindi.

The upcoming Malayalam movie has been titled as Nizhal and it would be helmed by state award-winning editor Appu N Bhattathiri, marking his directorial debut, reports TOI. The script of the film has been written by debutant S Sanjeev. Touted to be a mystery thriller, this project went on floors on October 19 in Kochi. Mookuthi Amman Trailer: Lady Superstar Nayanthara As the Deity in This RJ Balaji’s Massy Entertainer Looks Divine.

Talking about the project and the cast, director Appu N Bhattathiri in an interview to the leading daily was quoted as saying, “I had told the story of Nizhal to Kunchacko Boban a year and a half ago. He was excited to be a part of the movie. But we also needed a female cast to play the lead character. The protagonist is a bold woman. And that’s when Kunchacko Boban suggested Nayanthara’s name for Nizhal.” Mollywood lovers would surely be thrilled to watch Kunchacko Boban and Nayanthara together in Nizhal!

(The above story first appeared on LatestLY on Oct 26, 2020 04:38 PM IST. For more news and updates on politics, world, sports, entertainment and lifestyle, log on to our website latestly.com).