Rana Daggubati and Anushka Shetty's upcoming project will be helmed by Prabu Solomon. 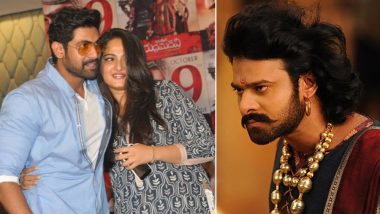 The last time we had seen Prabhas, Anushka Shetty and Rana Daggubati together was in Baahubali: The Beginning and Baahubali: The Conclusion. The trio’s performance in S.S. Rajamouli’s film won universal praise. However, it was Prabhas and Anushka Shetty’s chemistry which became talk of the town and their fans were looking forward to see them together in more films. Moreover, discussions about their off-screen chemistry led to speculations that the two would be pairing up for more films in the future. But now the buzz is it is not Prabhas, but Rana would be sharing screen space with Anushka in the upcoming film titled Silence. Are Rana Daggubati and Trisha Krishnan Trying to Rekindle Their Relationship?

Cinephiles would not be disheartened to watch Rana Daggubati and Anushka Shetty together onscreen although the preference is Prabhas. According to reports, the handsome hunk R Madhavan would be playing the lead role whereas Rana has bagged a cameo role. The upcoming project directed by Hemant Madhukar will apparently be shot in the United States. The thriller drama will also feature Hollywood actor Michael Madsen. There are even reports stating that Silence will be a multi-lingual project. WATCH: Prabhas, Rana Daggubati, Ram Charan, Jr NTR, Anushka Shetty Attend the Wedding of Baahubali Director’s Son SS Karthikeya and Pooja Prasad

Meanwhile, Prabhas is presently busy filming for Saaho (in which he is sharing screen space with Shraddha Kapoor) and Jaan. Rana Daggubati is busy wrapping up with Prabu Solomon’s Haathi Mere Saathi.

(The above story first appeared on LatestLY on Feb 18, 2019 08:44 AM IST. For more news and updates on politics, world, sports, entertainment and lifestyle, log on to our website latestly.com).