Rakshasudu, starring Bellamkonda Sreenivas and Anupama Parameswaran in the lead has received a thumbs up. This crime thriller hit the big screens on August 2 and critics are all praises for it. 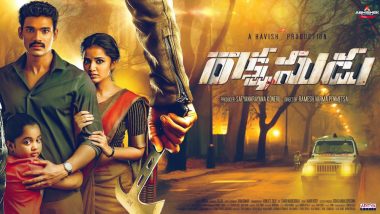 If a thriller doesn’t manage to keep the audience engrossed, make them keep guessing, then all the efforts goes into vain. But director Ramesh Varma has done a fab job with the Telugu film Rakshasudu, starring Bellamkonda Sreenivas and Anupama Parameswaran in the lead. This crime thriller hit the big screens on August 2 and critics are all praises for it. Be it for the genre, star cast, crisp story-line, direction, background music or any other technical aspect, Rakshasudu gets a thumbs up from the critics. Let’s take a look at what the reviewers have said after watching Rakshasudu. All You Need to Know about Premam Actress Anupama Parameswaran! Take a Look at Mary George’s Pics.

Director Ramesh Varma avoids the temptation to over indulge. Instead, he keeps things simple and makes an impact. Bellamkonda does a good job as the officer on the hunt to find the mysterious killer and puts in one of his best performances till date. What was refreshing to see was the fact that the leading lady was not reduced to a role of an eye-candy but is someone who plays a crucial role in the narrative, and Anupama Parameswaran does a sincere job of it. When Ramesh Varma decided to remake a thriller like Ratsasan, there were lofty expectations, but the director sails through and hits the mark with this film. Rakshasudu keeps you guessing at all times and as a viewer, you feel engrossed every minute of the film.

Rakshasudu is a thriller where the family drama and love episodes are blended into the narrative. The screenplay neatly amalgamates all those elements, but still, there are a few blocks which drag the story down. The investigative scenes, coming as part of the narrative in the first and the second half are the heart of the movie.

Rakshasudu has a power-packed screenplay that keeps the game interesting until the end. Rakshasudu is one of Bellamkonda Sreenivas’ career best as he looks super fit, confident and carries the role with ease and conviction.

Rakshasudu is the remake of the Tamil film Ratsasan, which released in 2018 and hence the pressure was quite high for the makers of this Telugu film. The film’s music has been composed by Ghibran.

(The above story first appeared on LatestLY on Aug 02, 2019 04:54 PM IST. For more news and updates on politics, world, sports, entertainment and lifestyle, log on to our website latestly.com).