Ravi Teja Birthday: 5 Interesting Facts About The Ravanasura Actor You Should Know

Ravi Teja is one of the most popular actors of Telugu Cinema. He has featured in numerous commercially successful films and fans hail him as Mass Maharaja. 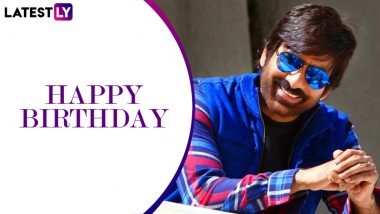 Ravi Teja is one of the most popular actors of Telugu Cinema. He has featured in numerous commercially successful films and fans hail him as Mass Maharaja. The actor who has turned a year older today has put in all the efforts through the 90s. Be it any role, he took it up whole-heartedly and worked on it honestly. Today he is one of the highest paid actors of Tollywood. He has worked in more than 70 films and has also managed to bag prestigious accolades. Ravi Teja celebrates his 54th birthday on January 26. On this special day, let’s take a look at some of the interesting facts about the actor. Ravanasura New Poster: Ravi Teja Looks Intense Smoking a Cigar While Wearing a Bloodied Tuxedo.

Full Name – Ravi Teja, son of Raj Gopal Raju and Rajya Lakshmi Bhupatiraju, was born as Ravi Shankar Raju Bhupatiraju but he is widely known by his stage name.

Debut – Ravi Teja had made his acting debut with a guest spot in the 1990 released film Abhimanyu. He continued to appear in movies such as Vandemataram, Karthavyam, Ninne Pelladutha among others and these were uncredited roles. In 1999 he had bagged his first lead role for the film Nee Kosam.

Collaboration with Puri Jagannadh – Ravi Teja and Puri Jagannadh are considered as the hit actor – director combo of Tollywood. When these two teamed up, they have delivered blockbusters. The projects that they have done together include Itlu Sravani Subramanyam, Idiot, Amma Nanna O Tamila Ammayi, Neninthe and Devudu Chesina Manushulu.

Passionate Dancer – Tollywood’s favourite actor has been passionate about dancing since childhood. As per reports, Govinda and Amitabh Bachchan are his inspirations when it comes to dance styles.

(The above story first appeared on LatestLY on Jan 26, 2022 08:15 AM IST. For more news and updates on politics, world, sports, entertainment and lifestyle, log on to our website latestly.com).