South Indian star Prabhas who has collaborated with KGF director Prashanth Neel for an action thriller titled as Salaar, kickstarted the said project with a puja on January 15, 2021. Even superstar Yash made his presence felt at the event. Check it out. 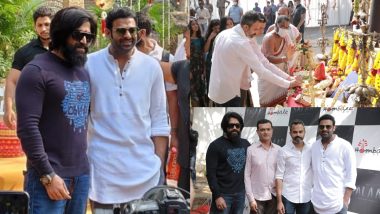 Everyone's favourite South Indian star Prabhas who has collaborated with KGF director Prashanth Neel for an action thriller titled as Salaar, kickstarted the said project with a puja today. This is the first time the actor-director has joined hands for a multilingual film that has high expectations already. Having said that, on January 15, 2021, all eyes were in Hyderabad where the flick was launched with a puja ceremony. FYI, even KGF star Yash graced the occasion as the chief guest. Salaar: Prabhas Makes Yet Another Announcement, Teams Up with KGF Director Prashanth Neel for an Actioner.

As soon as pics from the event went viral online, fans could not keep calm. Prashanth Neel took to his social media and shared a few photos. In his humble post, he thanked everyone who was present at the event. One of the pics also sees Prabhas and Yash in a single frame and admirers of the two superstars were on cloud nine after seeing it. #SalaarSagaBegins also was among the top trends on the micro-blogging site. Salaar: Prabhas Starrer to Go on Floors on January 15 in Hyderabad.

Thank you @VKiragandur sir and #Prabhas sir for this opportunity.

Thank you my rocky @TheNameIsYash for being with us today.

Will not let you all down!!

It is really heartwarming to see when a fellow actor supports the other. For the one's unaware, in Salaar, Prabhas will be seen in a never seen before violent avatar and will go under a massive physical transformation to fit in the role. Meanwhile, he is currently busy completing the shooting schedule of his upcoming film Radhe Shyam. Stay tuned!

(The above story first appeared on LatestLY on Jan 15, 2021 07:26 PM IST. For more news and updates on politics, world, sports, entertainment and lifestyle, log on to our website latestly.com).