Salaar: Prabhas Makes Yet Another Announcement, Teams Up with KGF Director Prashanth Neel for an Actioner

Titled Salaar, the movie will be an action saga and considering the director has already offered us something like KGF, we can expect another blockbuster in making from him. 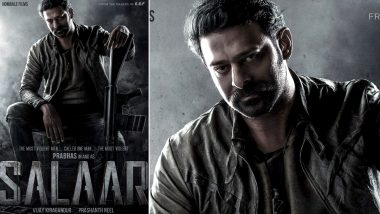 Prabhas is on a signing spree, isn't he? The Baahubali actor who became a huge phenomena post his stint in SS Rajamouli's directorial is currently the actor on every director's wishlist. While some are fortunate to have signed him for their next, others are simply queuing up to get his dates. After announcing his next with Nag Ashwin and Om Raut, the actor has gone ahead and signed Prashanth Neel's next actioner and their collaboration has only taken our expectations a notch higher.

Titled Salaar, the movie will be an action saga and considering the director has already offered us something like KGF, we can expect another blockbuster in making from him. Prabhas' first gritty look from the same has already been unveiled and if we are asked to rate, we'd easily it 10/10. Prabhas' intense gaze while resting his hand on what looks like a rifle is intriguing. We can't wait for the makers to share more deets about the same.

Check Out His First Look from Salaar

BIGGG NEWS... PRABHAS TEAMS UP WITH #KGF DIRECTOR... #Prabhas will collaborate with director #PrashanthNeel for an action saga... The film is titled #Salaar... Produced by #KGF producer #VijayKiragandur. pic.twitter.com/T6klU9XSiW

Prabhas is already working with Mahanati director, Nag Ashwin and the project also stars Deepika Padukone and Amitabh Bachchan. His second outing is a mythological saga, Adipurush with Tanhaji director Om Raut. Saif Ali Khan has been roped in as the antagonist and there are rumours that Kriti Sanon will come on board for it. While the actor is already working with the best in the industry, he goes a step ahead and signs Neel who's already a big name in the Kannada industry. If his list of upcoming movies doesn't make his contemporaries jealous then we don't know what will.

(The above story first appeared on LatestLY on Dec 02, 2020 02:43 PM IST. For more news and updates on politics, world, sports, entertainment and lifestyle, log on to our website latestly.com).