Koduri Srisaila Sri Rajamouli, widely known as SS Rajamouli, is known for his magnificent works in Telugu Cinema. He is one of the finest filmmakers of Indian Cinema. 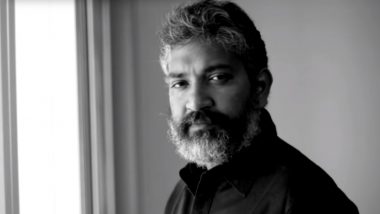 Koduri Srisaila Sri Rajamouli, widely known as SS Rajamouli, is known for his magnificent works in Telugu Cinema. The man who made his directorial debut in 2001 with the film Student No 1 with Jr NTR, is one of the finest filmmakers of Indian Cinema. Born to screenwriter KV Vijayendra Prasad and Raja Nandini, Rajamouli had first started directing Telugu soap operas before directing films. Simhadri, Vikramarkudu, Magadheera, Eega are some of the epic, blockbusters to his credit. And then of course the Baahubali franchise, the magnum opus had shattered records at the box office. Manushi Chhillar Is a Huge Fan of SS Rajamouli’s Work, Says ‘Bahubali and Magadheera Are My Absolute Favourite’.

Baahubali: The Beginning and its sequel Baahubali 2: The Conclusion, the two brilliant films had left everyone thrilled. The magnanimous set, direction, narration, performance of the cast, action sequences, background score and music and many other things were lauded by critics and the audience. On the occasion of SS Rajamouli’s birthday, let’s revisit some of the best moments from the director’s epic fantasy drama. RRR Movie Update: SS Rajamouli and Crew Are Back On Their Extravagant Set, Start The Shoot With 'Double Grit'.

There many moments in this film that will give the audience goosebumps and one among them is when Prabhas is introduced as Amarendra Baahubali with the track being played “Jiyo Re Baahubali” in the background. It showed how he is a respected prince by the people for his compassion and nobility.

This scene was a sight that one will always remember, the queen saving the infant from the guards of who was trying to kill Amarendra Baahulbali and Devasana’s son, the heir to the kingdom of Mahishmati. Her attempt to cross the river and the way she held the baby above the water and the way it was captured, it was one of the iconic scenes of Baahubali: The Beginning.

Local villagers spot the queen carrying the infant, who drowns after pointing towards the mountain above the waterfall. He is then raised by Sanga and her husband as their own son and they name him Sivudu. He grows up to be a well-built young man and with time his foster parents realise Sivudu is extraordinary. From his attempts to hike the mountain, climbing the waterfall, uprooting the massive Shivling and walking with it leaves everyone stunned.

It wasn’t just Amarendra and Mahendra Baahubali that grabbed audiences’ attention, even Bhallaladeva, who is extremely jealous of Baahubali’s popularity. He is seen as an extremely strong man, who does not care about people unlike Baahubali. There is a sequence where he displays his strength and anger by taking on a giant bull and that indeed showed his power as a tyrant king.

The shot where Kattappa kills Baahubali had raised one single question, ‘Why did Kattappa killed Baahubali?’ And movie buffs had to wait for two years to get the answer. The shock factor to see Kattappa, an incredibly skilled warrior, a sibling figure to Sivagami and uncle to Amarendra, the climax of him killing Baahubali was one of the most iconic scenes.

There are many more best moments in this magnum opus and one just could go on and on about it. We thank this ace filmmaker for giving such a brilliant and memorable film. Here’s wishing SS Rajamouli a very happy birthday!

(The above story first appeared on LatestLY on Oct 10, 2020 12:01 AM IST. For more news and updates on politics, world, sports, entertainment and lifestyle, log on to our website latestly.com).