RRR Movie Update: SS Rajamouli and Crew Are Back On Their Extravagant Set, Start The Shoot With 'Double Grit' (Watch Video)

In the video, we can see the crew members opening the gate of their extravagant set and uncovering props and tools needed for the shoot. 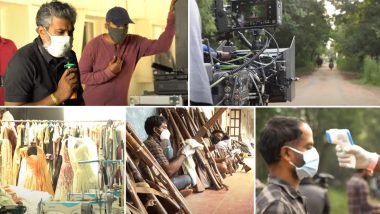 The much hyped and much awaited film RRR is trending and for the reason that fans will be happiest for! The shoot of this multi starrer SS Rajamouli film had begun long ago. However, due to lockdown, it was shut along with other film projects in the industry. Now as the industry is getting back on track, so is RRR! The makers shared a larger-than-life edit of how the crew and cast has resumed the shoot with 'double grit.' RRR: Ajay Devgn to Play Ram Charan – Jr NTR’s Guru in SS Rajamouli’s Period Drama?.

It always takes more than just actors and musicians to make a film. RRR makers probably are well aware and appreciative of this and thus they made a beautiful video of restarting the shoot.

In the video, we can see the crew members opening the gate of their extravagant set and uncovering props and tools needed for the shoot. The Baahubali director is seen in the frame, waiting for 'Bheem' Rama Raju. The video is made in a slow motion form and music, in true Rajamouli fashion. The COVID-19 safety aspect is also taken care of! Check it out below.

The movie also stars Ram Charan, Junior NTR, Alia Bhatt, Ajay Devgn and more. It will be released in in Hindi, Kannada, Malayalam and Tamil languages. Now that the RRR team is back with a bang, stay tuned for more updates from them!

(The above story first appeared on LatestLY on Oct 06, 2020 10:52 AM IST. For more news and updates on politics, world, sports, entertainment and lifestyle, log on to our website latestly.com).