On Master’s Release Date, Makers of Thalapathy Vijay Release a New Poster; Fans Share How They Miss Celebrating #MasterFDFS Due To Coronavirus Lockdown

Thalapathy Vijay’s film Master was scheduled to be released worldwide on April 9, 2020. However, due to the coronavirus outbreak, the makers decided to reschedule the release date. 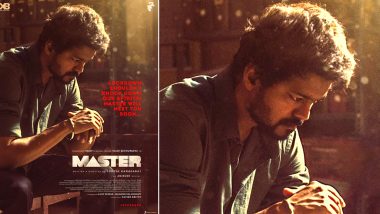 Thalapathy Vijay’s film Master was scheduled to be released worldwide on April 9, 2020. However, due to the coronavirus outbreak, the makers decided to reschedule the release date. It is not just Master, but many films have been pushed back. The theatres across the country and in many other regions of the world have been shut down in order to avoid mass gatherings. But had Master released today, Thalapathy Vijay fans would have been busy celebrating the joyous moment, #MasterFDFS. But guess what, the makers dropped in a new poster of Thalapathy Vijay and promised all fans that they would be meeting them soon! Master Song Andha Kanna Paathaakaa: Lyrical Video Featuring Thalapathy Vijay and Malavika Mohanan Is a Musical Treat for Kollywood Fans!

In this new poster, Thalapathy Vijay can be seen sitting on a chair and thinking about something. This poster also has the text that reads, “Lockdown shouldn’t knock down our spirits! Master will meet you soon…” This update has indeed left all Thalapathy Vijay fans elated. But had the film released today, by now, many would have even watched the first day first show. Master Song Vaathi Coming: Thalapathy Vijay and Anirudh Ravichander Dance Their Heart Out In This Energetic Track (Watch Video).

Here’s The Update From XB Film Creators On Master

We miss you, just like how you miss us!

Hoping that a master-mind finds an antidote and put an end to Corona!

Although fans understand the ongoing crisis, they have expressed on Twitter how they would have celebrated this day just like they have celebrated previous films of Vijay. From sharing videos of celebrations happening in the theatre to sharing introductory scenes, fans are going bonkers about not being able to celebrate #MasterFDFS. If you cannot believe, you got to take a look at some of the tweets shared by fans.

We Are always Waiting Thalaivaa

Waiting For The MASTER

This lockdown doesnt stops us!!

That's How Fans Would Have Celebrated Even #MasterFDFS

The Kind Of Roar You Can Expect When Master Releases

It Is Going To Be Epic Celebration

#Master - Master will meet you soon ! Ofcourse major missing those fdfs ! Will comeback more stronger ! We can expect as soon as possible

Fans Are Expecting #MasterTrailer To Be Out Soon

MASTER Will Meet You Soon...!

That's The Request From All Thalapathy Vijay Fans

Master also features Malavika Mohanan and Vijay Sethupathi in the lead. The buzz is also rife that the makers might drop the film’s trailer today as a treat for all fans. However, there has been no official announcement about it. Master is directed by Lokesh Kanagaraj and produced under the banner of XB Film Creators.

(The above story first appeared on LatestLY on Apr 09, 2020 02:58 PM IST. For more news and updates on politics, world, sports, entertainment and lifestyle, log on to our website latestly.com).