The Jeethu Joseph directorial is slated to be released in December this year. The flick is also being planned to be remade in Telugu with the title Donga. 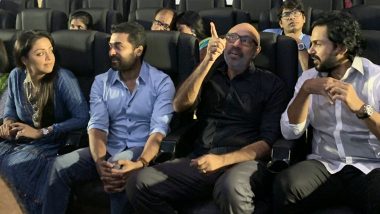 The makers of Karthi and Jyotika starrer Thambi are right now celebrating the film in a musical way. Following the tradition of most of the Tamil films, the makers of Thambi too had a grand audio launch. The event was attended by the plethora of stars including the protagonists and others namely Suriya, Sathyaraj, Nikhila Vimal, Rajasekar Pandian, Gnanavelraja, SR Prabhu etc. The music is composed by Govind Vasantha. Thambi Teaser: Karthi and Jyotika's Thriller With a Dash of Family Drama Looks Highly Intriguing (Watch Video).

At the event, the makers talked about Karthi's past success which was Kaithi. They also said that like Kaithi, even Thambi would be a success at the box office. In fact, Karthi also reconfirmed that he is indeed doing Kaithi 2 as well!

During the event, the makers also observed a minute of silence for the sudden death of Karthi's fan, Vyasai Nithya. The fan had reportedly done a lot of social work dedicating it to the star, under Makkal Nala Mandram. Suriya too advised the fans to not drive during the wee hours to avoid such unfortunate incidents.

Speaking of Karthi and Jyoti, Suriya revealed, "Both Karthi and Jyotika are great actors. They can cry for a scene without glycerin. I haven't been able to manage that in 22 years of my career so far; maybe in Nandha, I cried without glycerin." Well, it was a starry event in totality and the going through these pictures is a must for every die-hard fan!

Karthi Took Over the Stage

. @Karthi_Offl asking the crowd to observe 1 minute silence for the passing away of Fans Club head Nithyanand.#ThambiAudioLaunch pic.twitter.com/TgzuxhdkOC

Not Without the Producers!

The Jeethu Joseph directorial is slated to be released in December this year. The flick is also being planned to be remade in Telugu with the title Donga. Are you excited about this thriller? Do let us know your thoughts in the comments section below.

(The above story first appeared on LatestLY on Nov 30, 2019 12:53 PM IST. For more news and updates on politics, world, sports, entertainment and lifestyle, log on to our website latestly.com).