Ashok looks impressing and is adding the laughter quotient in the trailer. His chemistry with both Ritu and Nithya is charming and will definitely be liked by the audience. 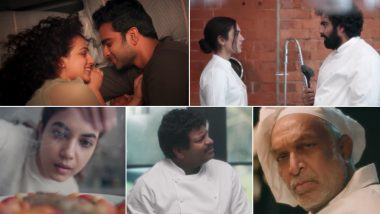 With theatres now slowly opening for 100% occupancy, filmmakers are making sure they entertain the audience with amazing films releasing on the big screen. The beginning of the new year marked the announcement of many interesting south films including Ashok Selvan, Nithya Menen and Ritu Varma. The film has been a talk of the town for its stellar cast and the audience was eagerly waiting to see the trailer of the film which released today. Are Dhanush and Nithya Menen Teaming Up For D44?

With a dose of humour and romance, the trailer of Theeni initially introduces us to Ashok's character. He gets random muscle spasm which always creates a problem for him. Ashok, who is a genius chef is accompanied by Ritu's character in a famous restaurant. Ashok slowly falls in love with Ritu and Nithya, who is a happy-go-lucky girl with the mind of a child, helps him get the girl. Things slowly unfold and go haywire when the trio develop misunderstanding amongst themselves. What led to this situation is something fans will get to see in the film.

Ashok looks impressing and is adding the laughter quotient in the trailer. His chemistry with both Ritu and Nithya is charming and will definitely be liked by the audience. The trailer also showed some delicious food in making and it will make you feel hungry instantly. With picturesque backgrounds and soothing music, the trailer looks like a complete package.

Speaking about the movie, the producer of the film, BVSN Prasad said, “This is an out-and-out entertainer with healthy comedy and heart-touching emotions and love story. The scenes involving Ashok Selvan, Nithya Menen and Ritu Varma are going to be highly impressive. We recently unveiled the film’s First Look. Having completed the filming part, ‘Theeni’ is in the post-production phase. We will announce the release date soon.” Oh My Kadavule Trailer: Vijay Sethupathi Has a Time-Travel Fix For Ashok Selvan and Ritika Singh's Marital Problems in This Rom-Com.

Presented by Bapineedu B and backed by under the banner of Sri Venkateswara Cine Chitra LLP and Zee Studios, the film is directed by Ani IV Sasi. The film also marks Ashok's Telugu debut and will also star Nasser and Sathya in pivotal roles. Ashok and director Ani had previously worked on an award-winning short film titled Maya.

(The above story first appeared on LatestLY on Feb 05, 2021 01:07 PM IST. For more news and updates on politics, world, sports, entertainment and lifestyle, log on to our website latestly.com).