He is seen wearing a pair of denim jeans with a grey t-shirt and a checkered shirt over it. His t-shirt is covered in blood while Pawan is giving a fierce look in the poster. 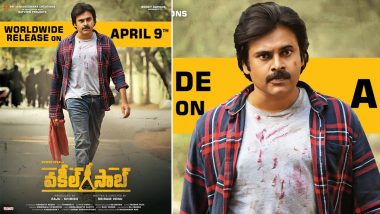 Pawan Kalyan created a stir when he shared the teaser of his comeback film Vakeel Saab recently. His fans got to see the star in a new avatar as he is all set to play the role of a lawyer in this film. The teaser piqued the excitement amongst the fans and they were eagerly waiting to get more updates about the film. The makers finally gave them some relief and have announced the release date of the film today. Taking it to Twitter, the film's producer - Boney Kapoor revealed the date when Vakeel Saab will be reaching the theatres. Vakeel Saab Teaser: Pawan Kalyan Makes Sure His Comeback Is Stylish and Powerful.

He informed that Pawan Kalyan's film will be releasing on the big screen on April 9, 2021. he even shared a new poster of the film where we can see Pawan in a casual avatar. He is seen wearing a pair of denim jeans with a grey t-shirt and a checkered shirt over it. His t-shirt is covered in blood while Pawan is giving a fierce look in the poster. He has a red cloth in his hand and we think this still is from one of the fight scenes from the film.

The POWER is set to unleash on the BIG SCREEN🔥⭐

Power Star Pawan Kalyan will be returning to the big screen after a gap of two years with Vakeel Saab. For anyone who is unaware, two years back superstar Pawan had said goodbye to films with an aim to focus on his political career. But when approached by the makers of Vakeel Saab, the actor gave a nod to doing the film. Helmed by Venu Sriram, Vakeel Saab is the remake of the Hindi film Pink that had starred Amitabh Bachchan in the lead role. Vakeel Saab is jointly produced by Boney Kapoor and Dil Raju. Vakeel Saab Motion Poster Starring Pawan Kalyan To Be Out On Power Star’s Birthday!

Vakeel Saab stars Nivetha Thomas, Anjali, Ananya Nagalla in the lead roles whereas Shruti Haasan is portraying a special role in the film. This movie was initially scheduled to release on May 15 in theatres, but due to the pandemic, the work on the film couldn't be completed and so it got delayed further. But with the release date out, we cannot wait for the makers to finally drop the trailer of the film as well.

(The above story first appeared on LatestLY on Jan 30, 2021 07:16 PM IST. For more news and updates on politics, world, sports, entertainment and lifestyle, log on to our website latestly.com).