Valentine’s Day 2021: Shruti Haasan Is Celebrating Being Single With an ‘Anti-love’ Post

While it is speculated that she is dating Santanu Hazarika, an artist from Mumbai, the actress took to Instagram to share a picture which is not at all about love. 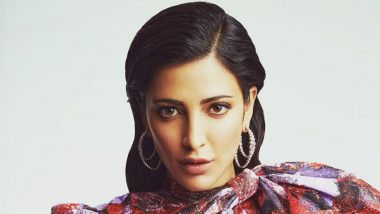 Shruti Haasan has always been about self-love. The actress spent the entire lockdown all by herself and had the best time working on her body, making music, cooking for herself and whatnot. She inspired everyone and taught people how to be self-independent always. The actress has often even discussed how important independency is and we love the fact that Shruti enjoys her own company so much. Today, on the occasion of Valentine's Day, the actress shared an "Anti-Valentine" picture to celebrate all the single people about there. Shruti Haasan Enjoys Her Midweek Post Retrograde Party in Some Style.

While it is speculated that she is dating Santanu Hazarika, an artist from Mumbai, the actress took to Instagram to share a picture which is not at all about love. She is seen dressed in her classy black avatar while posing for the camera. She is wearing a pack t-shirt with black pant paired with a black lipstick look. There are several pink hearts in the background that are all about 'Anti-Love' messages. A giant teddy bear is also resting next to Shruti and has a knife inserted on its side. Shruti captioned the image saying it is the "Anti Valentine vibe' attached with some broken heart emojis. Check it out:

Workwise, Shruti Haasan was last seen in Krack opposite Ravi Teja. The film despite 50 per cent occupancy was a hit in the Telugu states. She has also been roped in as the female lead in Prabhas starrer Salaar. The movie is helmed by KGF fame Prashanth Neel and is expected to see Prabhas in a never-seen-before violent avatar. No details about Shruti's character have been revealed yet but it'll be interesting to see Shruti and Prabhas in a single frame together. Shruti Haasan Redefines Bold, Black and Beautiful With a Blazer Jumpsuit!

She is also a part of Pitta Kathalu, Netflix’s first Telugu original which is a four-part anthology directed by Nag Ashwin, Nandini Reddy, Sankalp Reddy and Tharun Bhascker. Pitta Kathalu is produced under the banners of RSVP Movies and Flying Unicorn Entertainment. This Netflix drama is all set to be premiered from February 19.

(The above story first appeared on LatestLY on Feb 14, 2021 07:35 PM IST. For more news and updates on politics, world, sports, entertainment and lifestyle, log on to our website latestly.com).