Shruti Haasan channeled a classy, sassy and sexy vibe in a black blazer pantsuit by Nauman Piyarji. She was styled by Sukriti Grover. Shruti finished out the look with sleek hair, some chunky accessories and glossy glam. 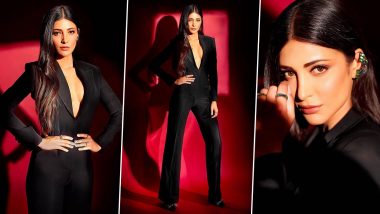 The South Indian sensation, Shruti Haasan is a delight to reckon with. The millennial don's quite a few caps, right from being an actress, singer, a chat show host and a fashionista in her own right. A whopping fan following of 13.3 million on Instagram speaks volumes of her fame. As equally at ease is she in ethnic ensembles, she pulls off classy western ones with enviable elan. Furthermore, she goes on to elevate those distinct styles with a fabulous beauty and hair game. Her natural flair to own and ace unconventional silhouettes, fabrics, hues, and textures render her as a delight to any stylist. Shruti Haasan channeled a classy, sassy and sexy vibe in a black blazer pantsuit by Nauman Piyarji. She was styled by Sukriti Grover. Shruti finished out the look with sleek hair, some chunky accessories and glossy glam

Shruti sure knows a thing or two about infusing hotness in any given style vibe. Shruti chose the infallible and the hottest hue of black and here is a closer look. Devi Review: Kajol, Neha Dhupia, Shruti Haasan's Short Film Will Make You Question the Society that You Live in 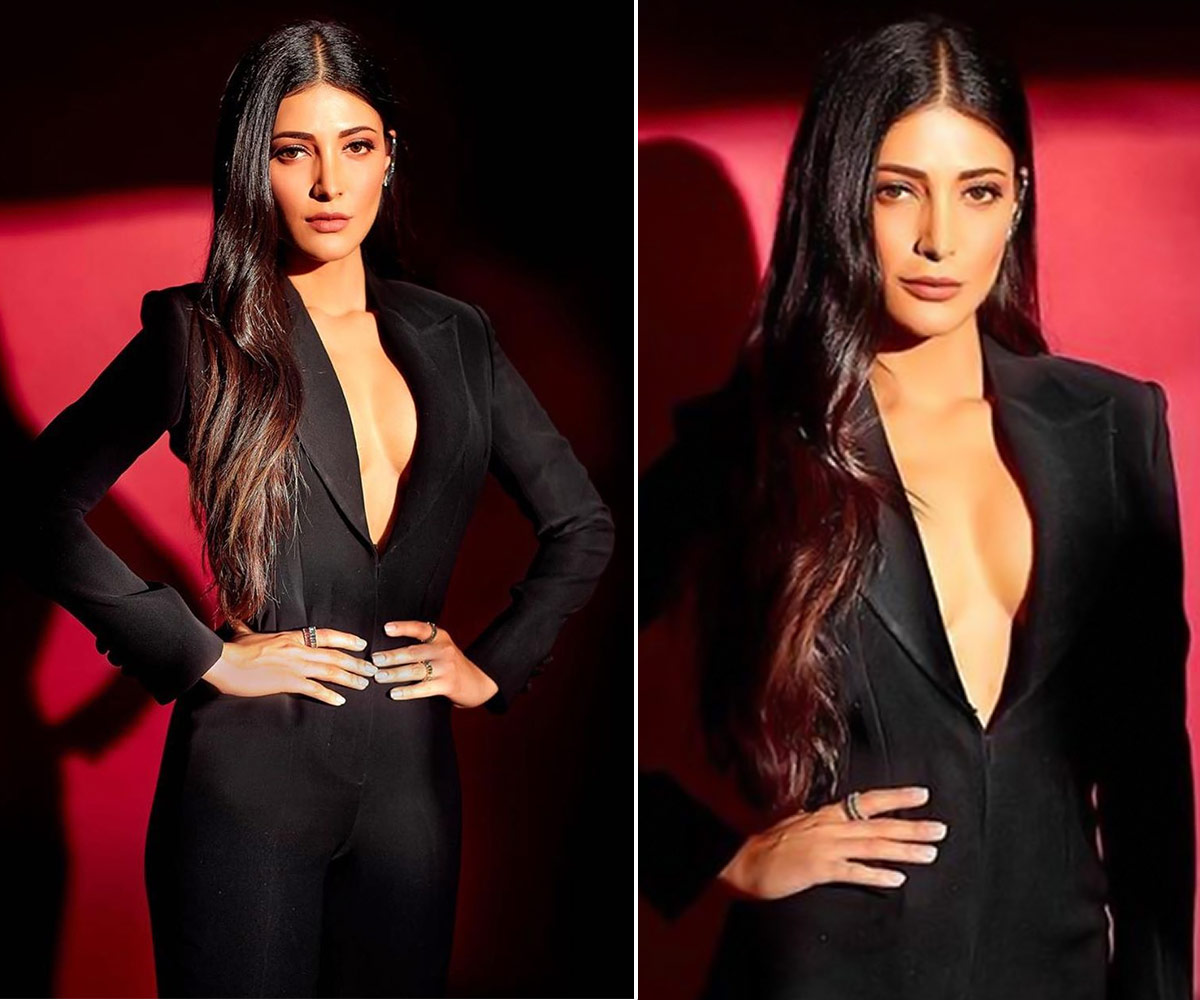 A customized black blazer jumpsuit accentuating her svelte frame from the NYC based designer Nauman Piyarji was amply accessorized by chunky rings and earrings from the Pipa Bella x Rhea Kapoor collaboration. Sleek hair with soft wavy ends, subtle glossy glam coupled with a pair of pointy flats with a gingham bow completed her look. Happy Birthday, Shruti Haasan! A Style Capsule of All the Times When the Grunge Girl Turned Into a Glam Goddess! 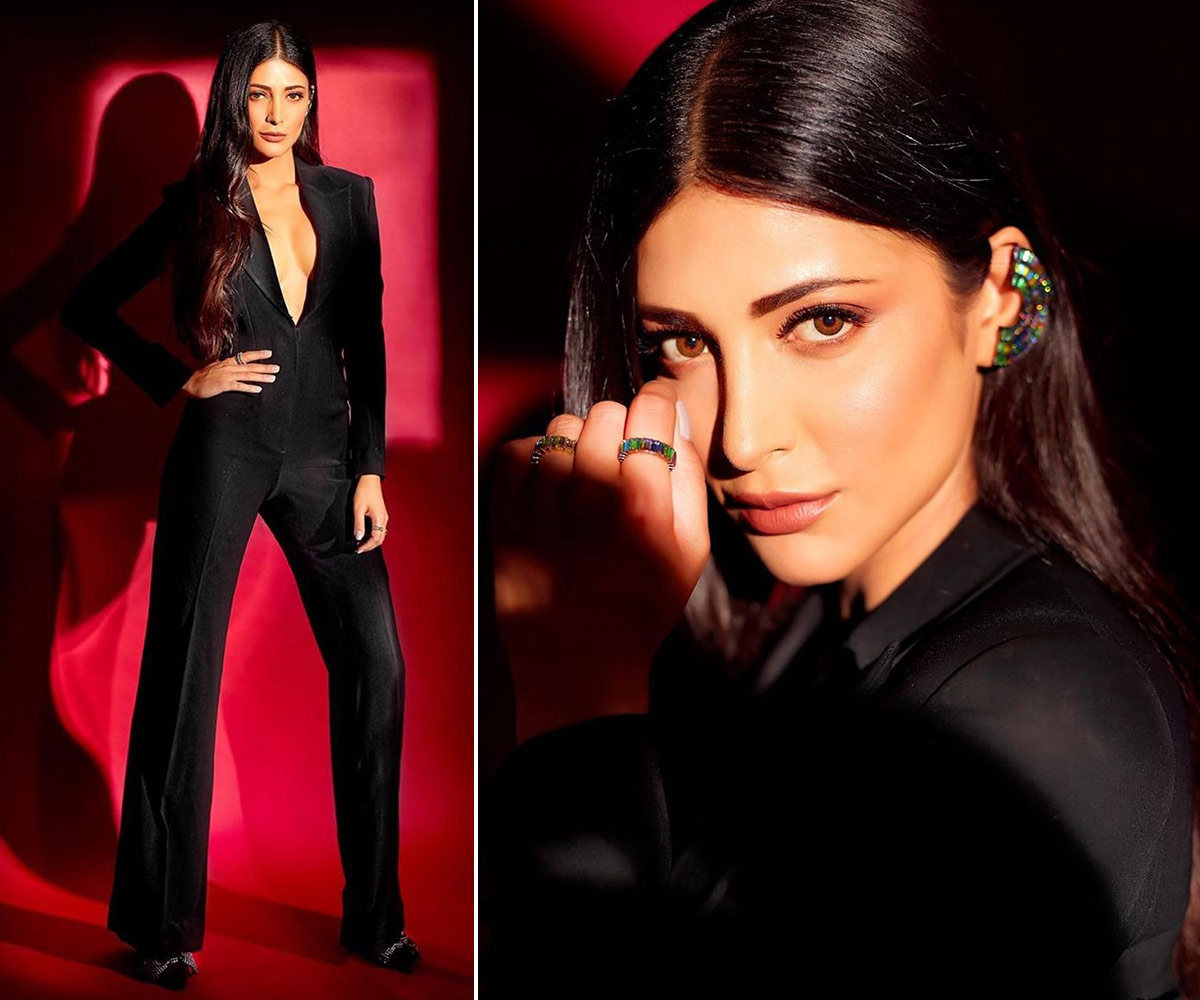 On the professional front, Shruti was last seen in the suspense drama short-film directed by the first-time director Priyanka Banerjee, Devi alongside an ensemble cast of Kajol Devgan, Neha Dhupia, Neena Kulkarni, Mukta Barve, Shivani Raghuvanshi, Yashaswini Dayama, Sandhya Mhatre, and Rama Joshi. Devi depicted 9 women from distinct strata of society forced into a sisterhood due to circumstances in which they are compelled to share their stories of abuse. She will be seen in Krack, an upcoming Telugu action-thriller directed by Gopichand Malineni featuring alongside Ravi Teja, Varalaxmi Sarathkumar and Samuthirakani. Shruti makes a comeback into the Telugu film industry with this film as her last appearance in a Telugu film was in 2017 with Katamarayudu. She will also be seen in the Tamil film, Laabam, written and directed by S. P. Jananathan featuring alongside Vijay Sethupathi, Kalaiyarasan, Jagapathi Babu and Harish Uthaman.

(The above story first appeared on LatestLY on Mar 19, 2020 04:30 PM IST. For more news and updates on politics, world, sports, entertainment and lifestyle, log on to our website latestly.com).