A video is doing rounds on social media in which Stefy, who is known for her role in Thaenmozhi BA serial, confirmed that she is a part of Valimai. 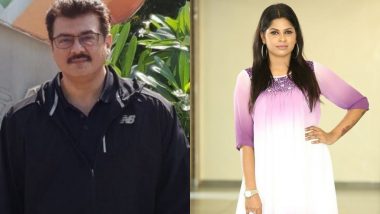 The Nerkonda Paarvai trio – Thala Ajith (lead actor), H Vinoth (director) and Boney Kapoor (producer) – are reuniting for the upcoming flick, Valimai. This would be their second Tamil film together and fans are pretty excited about it. Nerkonda Paarvai (a remake of the Hindi film Pink) had received positive response from critics and fans, and hence the expectations are high from Valimai as well. Valimai is touted to be an action-packed thriller movie in which Thala Ajith would be playing the lead role. As per the latest development, actress Stefy in on-board for the film and she would be seen playing a pivotal role in Valimai. Thala Ajith Gets Injured While Filming a Stunt Sequence, Twitterati Wish Valimai Actor for a Speedy Recovery.

A video is doing rounds on social media in which Stefy, who is known for her role in Thaenmozhi BA serial, confirmed that she is a part of Valimai. In the interview, the actress has revealed how she landed this role and how excited she is to share screen space with Thala Ajith. If you haven’t watched the video yet, check it out right away. Zee Cine Awards Tamil 2020: Thala Ajith’s Valimai to Release on Diwali 2020, Confirms Boney Kapoor!

Actress STEFY OnBoard Of #ThalaAjith's #Valimai...🌟

Valimai is Thala Ajith’s 60th film and it is said that the superstar would playing the role of a tough cop. The last time Ajith was seen playing the role of a police officer was in the movie Yennai Arindhaal that released in 2015. Talking about Valimai, producer Boney Kapoor had said, “Valimai is a full-on commercial film with a lot of action. (The film is also a) family drama, so it has all the ingredients for which Ajith is known for. It will be far more thrilling, adventurous and emotional, and of course, the action is high octane,” reports Behindwoods. Valimai is slated to release during the time of Diwali this year. Keep watching this space for further updates!

(The above story first appeared on LatestLY on Feb 26, 2020 11:30 AM IST. For more news and updates on politics, world, sports, entertainment and lifestyle, log on to our website latestly.com).