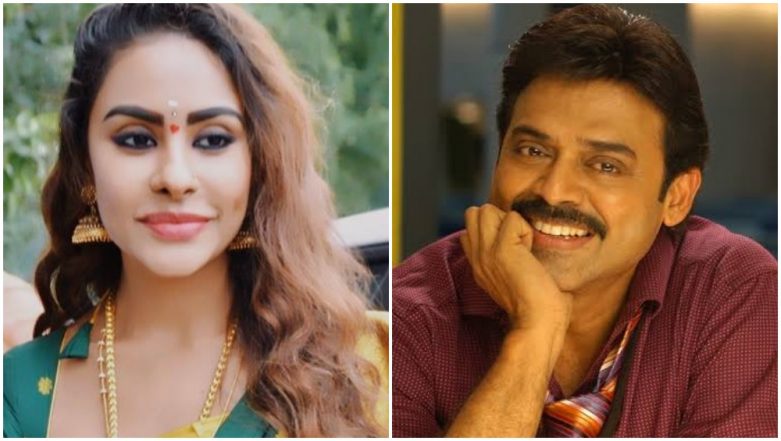 Tollywood lovers are eagerly looking forward to watch the reality show Bigg Boss Telugu 3. There are many names of leading Telugu stars been taken who could probably host the third season. But the makers of the show haven’t made any official announcement yet. Looks like the controversial actress of the Telugu industry knows the name of the superstar who would be hosting the reality show. Actress Sri Reddy in her Facebook post has mentioned that superstar Venkatesh Daggubati would be hosting Bigg Boss Telugu 3. Baahubali Fame Anushka Shetty to Host Bigg Boss Telugu 3?

While the official announcement is yet to be made, the Aravind 2 fame Sri Reddy took everyone by surprise by stating, “We all love venky maama like anything..good news to all venky maama fans..bigboss host he is..yes,yes,yessssss”. There is no doubt about the veteran actor’s fan base down south but is he really hosting the show? After Sri Reddy shared this post, there are many fans who have expressed their happiness about it. However, neither the actor nor the makers of Bigg Boss Telugu have commented anything on it. Bigg Boss Telugu 3: Jr NTR Offered This Whopping Amount for Hosting the Show.

Take a look at the post that Sri Reddy shared:

It was just last week when there were rumours stating that Baahubali franchise actress Anushka Shetty is also been considered as the host of Bigg Boss Telugu 3. But if it happens, she would be the first female to host this reality show. The earlier seasons were hosted by Jr. NTR and Nani. Let’s wait and watch who hosts the third season of Bigg Boss Telugu.