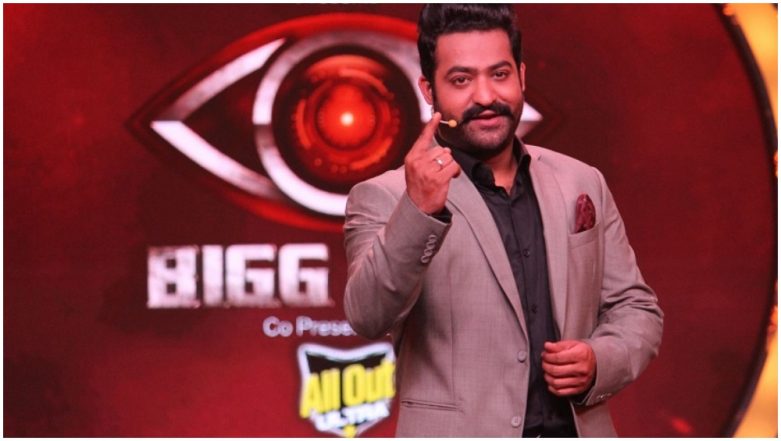 After giving a commendable entertainment to Telugu audience, Bigg Boss is returning with its third season. As Bigg Boss Telugu 3 is all set to hit the television screens by end of this year, Jr NTR will reprise his role as its host. Yes, you read that right! The actor has given nod to the makers of Bigg Boss show is all set to host the upcoming season of Bigg Boss Telugu. For the uninitiated, the first season of Bigg Boss Telugu, which was launched on July 16, 2017, on Star Maa and concluded on September 24, 2017, was hosted by Jr. NTR. However, in the season 2 of the franchise, superstar Nani had replaced Junior NTR as the host of the reality show as the latter got busy with his acting assignments due to which he could not resume his role. WATCH: Prabhas, Rana Daggubati, Ram Charan, Jr NTR, Anushka Shetty Attend the Wedding of Baahubali Director’s Son SS Karthikeya and Pooja Prasad

If the latest reports are anything to go by, Jr NTR, who will be anchoring the third season of the popular reality show, will be a part of 30 episodes and for which he is being paid a bomb. No kidding! The reports suggest that the actor has been offered a whopping sum of Rs 20 crore as remuneration to host Bigg Boss Telugu 3. The amount is way more than what he had earned in the first season; It's almost 6 crore higher than before. Undoubtedly, Jr NTR is a major reason behind the show’s popularity and the actor getting a whopping amount to be a part of it should not really surprise any one of us.

Also, the host of Bigg Boss Telugu 2, Nani, swore (in one of his interviews) to not host any reality show in the future after being mercilessly trolled on social media. Well, this could be the one of the reasons why the makers, who are on a hunt for the host (again) for season 3, are leaving no stone unturned to bring back Jr NTR. Prabhas, Rana Daggubati, Ram Charan, Jr NTR Dance Like Crazy at SS Rajamouli’s Son’s Wedding – Watch Video

Here's a Picture of Jr NTR: