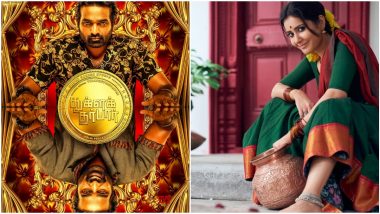 Tughlaq Durbar is the upcoming film starring Makkal Selvan Vijay Sethupathi in the lead. Marking Delhiprasad Deenadayal’s directorial debut, this film will now feature Raashi Khanna as the female lead. Due to date clashes, Aditi Rao Hydari will not be seen as the leading lady of Tughlaq Durbar. The makers have not only shared Raashi Khanna’s look from the upcoming flick, but have also shared a few details about her character. Aditi Rao Hydari and Vijay Sethupathi to Come Together for Political Satire Tughlaq Durbar.

Director Delhiprasad Deenadayal was quoted as saying, “We tried our best to work out the date issues with Aditi, but it didn’t work out. Our next immediate choice was Raashi Khanna. She plays a Marwari girl and fits in the role perfectly. When we narrated the script, she really liked the various shades her character offers. Her character is a girl-next-door-one, but her mannerisms will be a tad different. She worked around her dates and joined the shoot recently,” reports TOI. Tughlaq Durbar: New Stills Of Makkal Selvan Vijay Sethupathi From The Upcoming Political Thriller Hit The Internet!

Talking about the shoot schedule, the filmmaker further stated, “Both Vijay and Raashi have begun shooting for their portions, and we recently filmed a song as well. We have completed nearly 50% of the film, and plan to wrap up the shoot by the first week of December. We finished most part of the film involving a huge gathering in February. There is one song, though, that would require several people in the background. We are figuring out on how to work on the same.” Tughlaq Durbar, touted to be a political thriller, is produced by Lalit Kumar under the banner of Seven Screen Studio.

(The above story first appeared on LatestLY on Oct 20, 2020 02:13 PM IST. For more news and updates on politics, world, sports, entertainment and lifestyle, log on to our website latestly.com).