The Actor From NBC's 'YOUNG ROCK' Can Actually Rap!

NBC’s new hit series based upon the life of professional wrestler and world renowned actor Dwayne “The Rock” Johnson hit the small screen at the beginning of 2021. 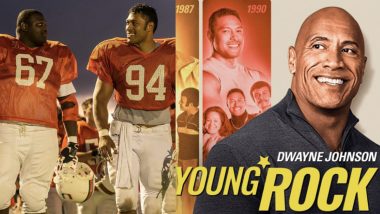 NBC’s new hit series based upon the life of professional wrestler and world renowned actor Dwayne “The Rock” Johnson hit the small screen at the beginning of 2021.

While critics have raved, and fans have awed about the “frame story” series where Johnson is running as a candidate in the 2023 presidential election, fans have discovered the hidden musical talents of the actor who plays Johnson’s best friend - Russel Maryland.

Maryland, the former defensive tackle who played professionally for the Dallas Cowboys, Oakland Raiders, and Green Bay Packers was remembered for his stout against the run - but he’s mostly remembered for helping to bring home three Super Bowls to Dallas!

Fans not only wanted to relive the “Russell Maryland Era,” but also get a closer look at Wavyy Jonez - the actor NBC chose to play him. We’ve seen Jonez star in some of our favorite Netflix series or Hulu shows,  but fans never knew he could rhyme - until now.

The multi-talented actor/rapper posted his latest music video “INNABOX” to his YouTube channel and fans are finally catching wind of his flows.

Shot In Time Square, the song not only describes the mantra Jonez lives by as “don’t put him in a box,” this song also is for everyone who believes they can do more than one thing - and be great at it.

While Jonez has embarked on a successful acting career, depicting characters such as the Notorious B.I.G. or Russell Maryland, Jonez has also thrived as an independent artist and touted his “Fat City Global” Label!

Don’t put me in a box” is exactly what Wavyy has showed the world and we’re rooting for him every which way he decides to go!