Ashnoor Kaur: Long Before I Knew Meaning of Passion, I Started Acting at Age of Five

Ashnoor Kaur has been seen in Bollywood films like Sanju and Manmarziayaan. In Swad, she says her role is different from the earlier ones, as she has never played a glamorous diva onscreen. 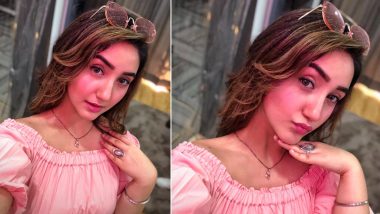 Actress Ashnoor Kaur will be seen in the upcoming short film Swad, a film she says is all about small moments in our life that are at certain times missed out. Ashnoor has been seen in Bollywood films like Sanju and Manmarziayaan. In Swad, she says her role is different from the earlier ones, as she has never played a glamorous diva onscreen. "I play the role of an established superstar and it is pretty different from the roles I played before in any of my projects, I never portrayed an actor in reel life," the actress says. Pari Hun Mein: Ashnoor Kaur’s Debut Web Series’ First Look Poster Out!

On her chemistry with co-star Saanand Verma, and the chalenges the role posed, she says: "This role has two sides -- one in a fan's imagination and one in actual life. So it is a bit complex for me as I have never done such a role. Saananad in is shown as the biggest fan of the filmstar that is me, and he is just dying to work with me. Finally, his dream comes true and then what a mess is created around both of them is interesting to watch." She finds the role challenging. "It is tough to present the aura of a superstar on screen. It has to be done consciously and thoughtfully," Ashnoor explains. Yeh Rishta Kya Kehlata Hai Star Ashnoor Kaur aka Naira Goes Badtameez In A Party: Watch Exclusive Video!

While sharing about behind-the-camera moments, the actress recalls the crowd outside the shooting venue and says: "It was really heartwarming to see how people had gathered, were shouting, calling out names and clicking pictures. This is something I can never forget." Right now, Ashnoor says she is trying to balance her studies with acting: "Maintaining a balance between the two is tough but where there is a will there's a way, and I am giving my best to both."

Is acting her ultimate passion or is she looking for something beyond this in future? "Acting is what I love to do. In fact, long before I knew the meaning of passion, I started my career in acting at the age of five. So, I am already following it and will continue doing the same," she replies. Talking about her future projects, Ashnoor reveals: "I am looking for performance-oriented roles with good content and storyline. I don't want to restrict myself and want to explore different kinds of characters in my upcoming projects." "Swad" is a short film with four different stories directed by Sachin Gupta and featuring Ashnoor Kaur and Saanand Verma in lead. It is scheduled to be released on an OTT platform.

(The above story first appeared on LatestLY on Jul 20, 2021 09:31 PM IST. For more news and updates on politics, world, sports, entertainment and lifestyle, log on to our website latestly.com).