The BARC report is here and it is indeed surprising. Anupamaa still rules at the top of the TRP chart whereas Jethalal's TMKOC, not in top five. Also, two new shows enter the top five race. Check it out. 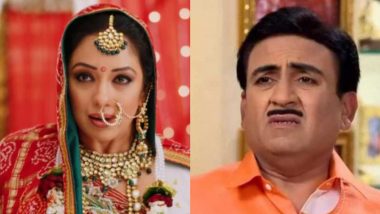 It's a victorious moment for Rupali Ganguly and Sudhanshu Pandey's starrer Anupamaa, as this Star Plus drama has once again grabbed the top spot on the TRP chart. Maintaining its position just like last week, the twisted love story of Anupamaa and Vanraj is getting the much-deserved love. The current track where Anupamaa finally discovers that her husband is cheating on her has garnered great TRPs for the show with 8664 impressions as per Hindi GEC (Urban) chart. However, the shocking part to notice here is that SAB TV's popular sitcom Taarak Mehta Ka Ooltha Chashma has slipped from the top five list. BARC Report: Rupali Ganguly - Sudhanshu Pandey's Anupamaa Tops The TRP List, Takes Over Shraddha Arya - Dheeraj Dhoopar's Kundali Bhagya (View Ratings).

The reason behind TMKOC not making it to the top five might be the entry of two new serials on the chart namely Rupal Patel, Devoleena Bhattacharjee, Harsh Nagar, Senha Jain's Saath Nibhaana Saathiya 2 and Neil Bhatt's Gum Hai Kisi Ke Pyar Mein, both from Star Plus. However, that being said, ZEE TV's Kundali Bhagya and Kumkum Bhagya have managed to hold the second and fourth position respectively. Bigg Boss 14 BARC Report: Salman Khan's Show Fails To Grab A Spot In Top 5; Is The Boring Line-Up Of Contestants The Reason Behind Its Low TRPs?

Check Out The TRP Chart Below: 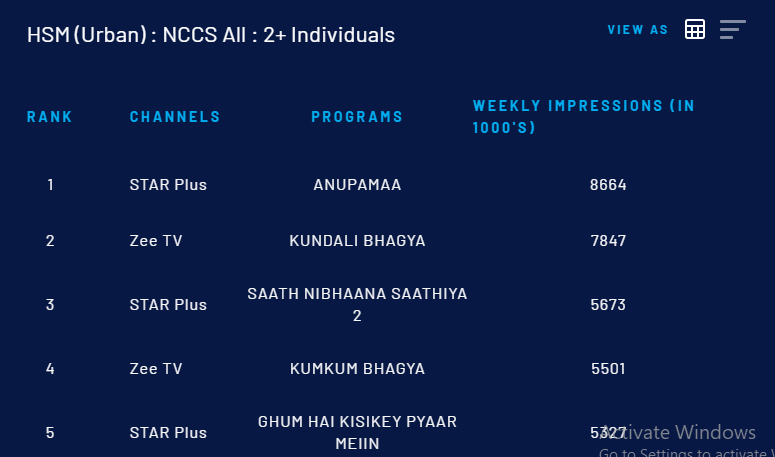 Another takeaway from the TRP report is that reality shows like Amitabh Bachchan's Kaun Banega Crorepati 12 and Salman Khan's Bigg Boss 14 have once again failed to impress the audience. Coming back to daily soap, Anupamaa's fate, looks like the family drama will make a hat-rick if it continues to the rule the BARC chart next week too. FYI, the top five TV shows seen above is from Week 42 (2020), i.e. from October 17 to 23, 2020. Stay tuned!

(The above story first appeared on LatestLY on Oct 30, 2020 02:51 PM IST. For more news and updates on politics, world, sports, entertainment and lifestyle, log on to our website latestly.com).