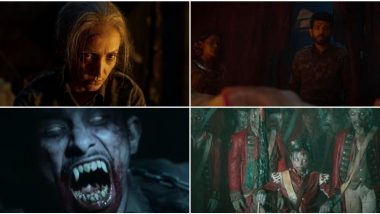 Have you watched Betaal, the new Indian mini-series directed by Patrick Graham and Nikhil Mahajan that is streaming on Netflix? If the answer is in negative, then kindly don't read ahead. For, if the title of this feature wasn't a clue enough, there are enough spoilers in the article. Betaal is supernatural horror series, that is backed by international production house Blumhouse and Shah Rukh Khan's Red Chillies Entertainment. The series is about a group of soldiers who has to survive a night not dying after unleashing an ancient murderous evil. Betaal Review: Viineet Kumar Fights The Walking Dead in Shah Rukh Khan’s Nerve-Racking but Thrilling Netflix Zombie Series.

Betaal, that begun streaming on May 24, got mixed reviews. Its detractors felt that the show had nothing new to offer when it comes to horror. Its shippers are in awe of its different storyline, performances and atmospheric horror. The writer, in his humble personal opinion, isn't a fan of the show's writing, especially in the final episode. But he enjoyed the gripping treatment given to the series, that it doesn't overstay its welcome and the set design.Plus, it had enough homages to the horror greats like George Romero's zombie series, Sam Raimi's Evil Dead movies, Tommy Wirkola's Dead Snow and John Carpenter's The Thing.

Betaal also doesn't rely on jump scares, which is cool, since that's really a lazy tactic to scare viewers. That doesn't mean the series doesn't have creepy moments. In this feature, let's look at seven moments that creeped us the most while watching Betaal. 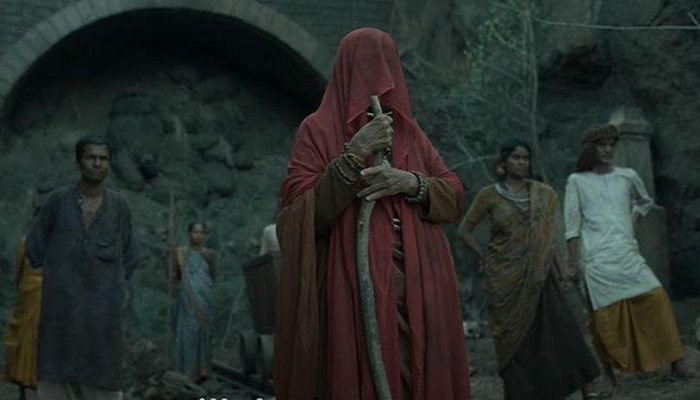 After the soldiers blast the caved tunnel open, a group of construction workers go in. After a lull, only one of them wobbles out of the dark cave and the onlookers are shocked to see his guts spilling it, before he falls down on the ground, dead. 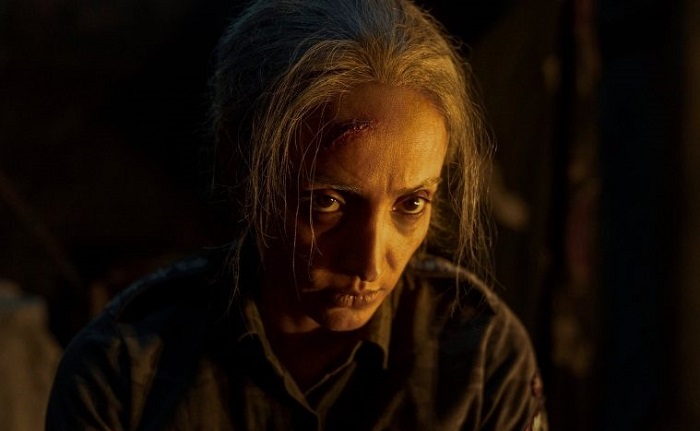 Something strange happens to Commandant Tyagi in the cave. Her hair has turned white all of a sudden. She has become catatonic, occasionally waking up from the state to mutter something mysterious. The creepiest moment of hers, and also of the show, is when the survivors are sitting on the table and trying to contact for outside help with their walkie-talkies, when they hear a static noise. To their shock, they realise the screeching noise isn't coming from their communicators, but from Tyagi who is now smiling weirdly at the contractor's teenage daughter. Betaal: 10 Questions That Are Still Troubling Our Minds After Watching Shah Rukh Khan’s Netflix Horror Series (SPOILERS). 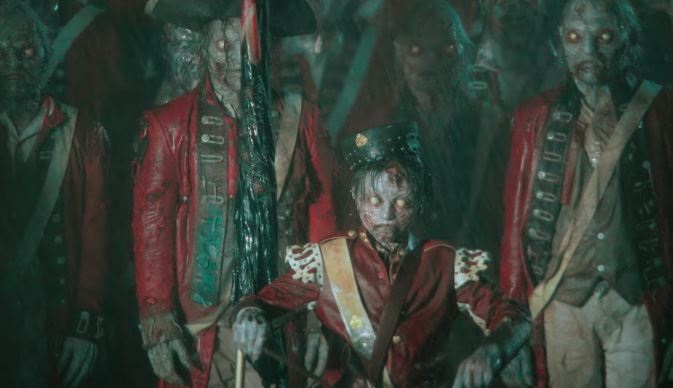 The undead who has risen from the tunnel belong to a British army unit from the 19th century. They even have the drummer boy, who keeps beating his drum and only halts for moment, when he is shot down by one of Vikram's men, only to rise again and keep drumming! That's some job dedication! 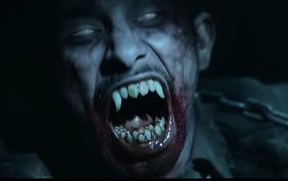 The undead have their sights on Saanvi, the contractor's teenage daughter. When she is trying to sleep in a desolate room in the barracks, she hears someone trying to open the door. It opens up, but no one enters. Or so we think. To both Saanvi's and our shock, we see one of Vikram's killed men, now a zombie, crawling up on the ceiling of her room, and later, another accosts her from under the bed. Thankfully, she is saved, though the sight of the zombie crawling like a spider still gives us the shivers. 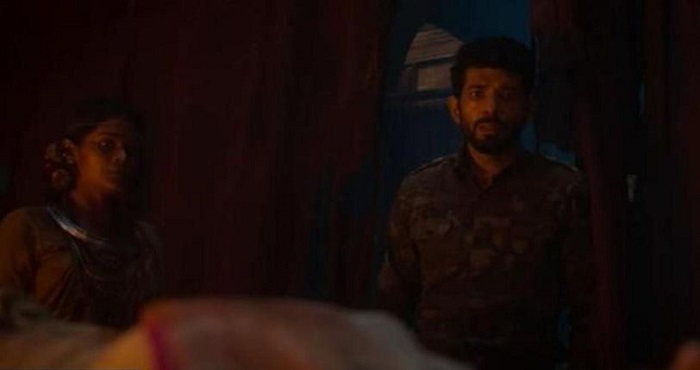 Saanvi's mother gets shot dead by the gunfire from the undead army just before they enter the safety of the barracks. Her body is later shown nailed down in the altar of a secure room in the barracks for the fear that she may rise again as the undead. Rise she does, or rather, she crawls after managing to get herself unnailed out of the altar towards her daughter who is confined in her room. But before we see that ghastly sight, we get to hear her creepy voice trying to lure Saanvi. Once again, the heroes do come to the girl's rescue, before her undead mother could cause any harm. Betaal: Shah Rukh Khan's Netflix Production to Start Streaming From May 24 - Here's All You Need to Know About the Series' Cast, Plot and More. 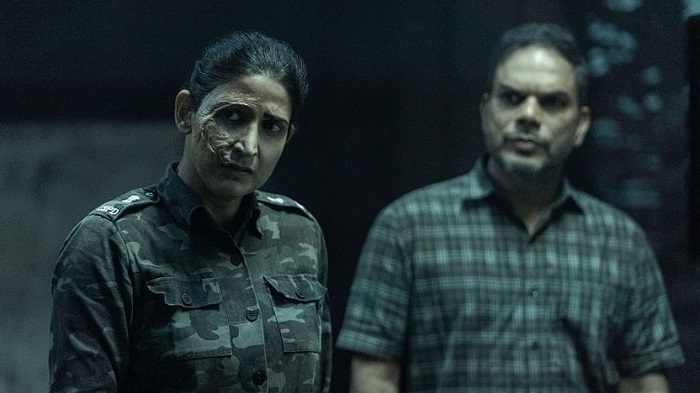 The scarred Ahlu (Aahana Kumra) is perhaps the most heroic in Vikram's team, even more humane than her leader. So it was saddening to see her killer, first getting her throat slashed by Mudhalvan, and later the zombies jump on her and chew her up, leaving her body into a bloody mess. She returns, though, as an undead in a very surprising way. As Vikram and the four remaining survivors try to escape from the undead, he assigns them numbers so that they don't lose each other in the darkness. Imagine his utmost shock, when he hears an extra number during the roll call as his favourite subordinate returns in a way that would make Stephen King proud. 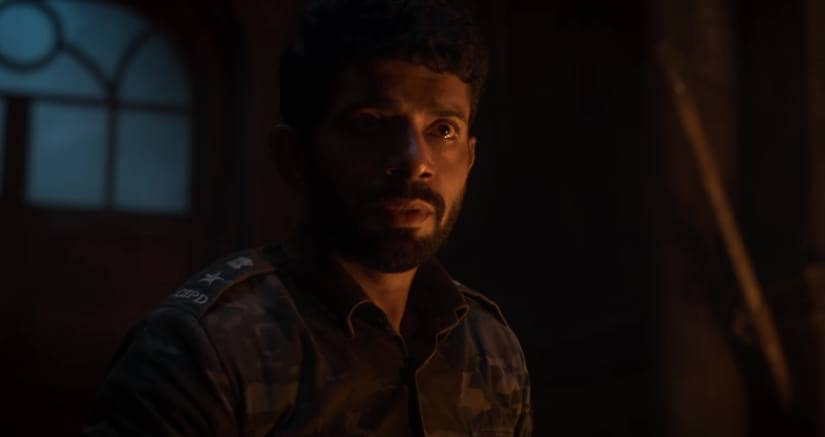 Vikram, living up to his name, gets hypnotised by the Zombie British General with the power of Betaal and is tasked to kill Saanvi as a sacrifice. The sight of the undead general dropping from the roof of the cave and standing behind Vikram and whispering into his ears is a spooky sight enough. While he almost commits the sin, Vikram manages to break out of the reverie and stab the general in the face. Unfortunately, he is no Night King, as the general returns in an instant and bites Vikram on the neck, before the rest of the zombies descend upon him.

(The above story first appeared on LatestLY on May 28, 2020 09:37 PM IST. For more news and updates on politics, world, sports, entertainment and lifestyle, log on to our website latestly.com).