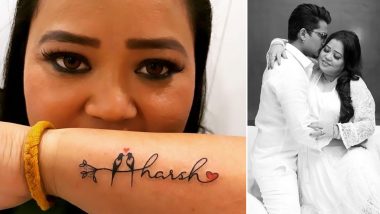 Usually, Bharti Singh and hubby Haarsh Limbachiyaa are all about cracking jokes and pulling fast ones on each other... basically entertaining their followers by making them laugh, a job that they are very good at too. However, if you were to take a closer look into the lives of the couple, you will find o0ut that both Bharti and Haarsh have a romantic side to themselves and on occasion, they aren't afraid to show it to the world, especially on certain events like their anniversaries or birthdays. Khatron Ke Khiladi 10: What Are KKK9 Contestants Bharti Singh and Haarsh Limbachiyaa Doing In Bulgaria? Find Out Below.

And in one such occasion, which happened to be Haarsh's 33rd birthday, Bharti Singh literally went the extra mile, braved her fears (not the Khatron Ke Khiladi type ones) and get herself inked.

What a gift ❤️ she cant even take injections 😐 and she did it for me 😍 this is the best gift from my love ❤️ thankyou so much for lovely tattoo @harshbhanushali_tattooartis @parth.indianinctattoo @indianinctattoo 🤟🤟🤟👌👌👌👌

Hubby Haarsh, in an appreciation post for his wife, revealed that Bharti is pretty scared of needles and never gets herself injected, got his name inked on her forearm and also revealed that he appreciated the gesture. Bharti and Haarsh, after keeping their relationship under the wraps for a very long time, tied the knot in Goa on December 3, 2017, in a grand wedding, with all of television and few Bollywood celebrities gracing the festivities.

(The above story first appeared on LatestLY on Jan 30, 2020 10:08 PM IST. For more news and updates on politics, world, sports, entertainment and lifestyle, log on to our website latestly.com).