Bigg Boss 14: All Contestants Nominated for Eviction as a Punishment After Aly Goni and Nikki Tamboli Violate House Rules

Rakhi was quite upset to know that no one voted for her while Jasmin was also shocked that she only got one vote, considering that everyone is very sweet to her in the house. 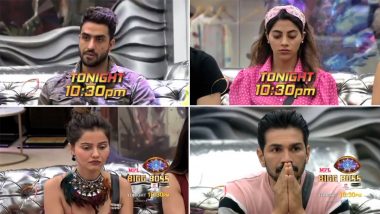 Monday is always fun at the Bigg Boss 14 house. The nominations happen today and we see the ugly side of the contestants take over as they nominate each other to be kicked out of the house. Last week Eijaz Khan, Rahul Mahajan and Abhinav Shukla were nominated by the contestants and were saved because of Salman's birthday. The actor said that since it's his birthday and the holiday season, no one would be evicted. The contestants were happy to hear the news and thanked Salman for his gesture. Bigg Boss 14: Fans of Rahul Vaidya Trend ‘NO RAHUL NO BB14’ on Twitter After His Voluntary Exit From the Reality Show.

On today's episode, Bigg Boss gave a twist to the nomination session. He asked contestants to give him two names whom they want to save from evictions. Vikas was saved from the evictions since he was the captain of the house while others gave the names of the contestants they wanted to save. Nikki Tamboli was the first one to go inside the confession room to cast her vote. Bigg Boss warned her not to discuss the nomination with any other contestants but Nikki and Aly Goni did not listen to his instructions. This was brought to Bigg Boss' notice who was upset by this behaviour.

The nomination round was over and Arshi Khan, Rahul Mahajan and Jasmin Bhasin were nominated because they got only one vote during the nominated. Rakhi Sawant, Sonali Phogat were nominated because they did not get any vote at all. But there was twist here1 Since the housemates were not abiding by Bigg Boss' rules, he nominated everyone in the house. Nikki was agitated since she was saved and just because of a small mistake committed by her, she was nominated for eviction. Bigg Boss 14: Can Jasmin Bhasin Turn Rumoured Beau Aly Goni’s Entry To Her Advantage?

Rakhi was quite upset to know that no one voted for her while Jasmin was also shocked that she only got one vote, considering that everyone is very sweet to her in the house. Aly Gony, Abhinav Shukla also got into a discussion about the nominations and the names they did not take inside the confession room. Now it will be fun to see who says goodbye to the BB house this week.

(The above story first appeared on LatestLY on Dec 28, 2020 11:37 PM IST. For more news and updates on politics, world, sports, entertainment and lifestyle, log on to our website latestly.com).