Contestants are made to play an emotionally brutal task to win immunity. Rubina Dilaik's immunity can be won by any housemate who would reveal a dark secret about them that would shock everyone. Rubina can also defend her immunity by doing the same. 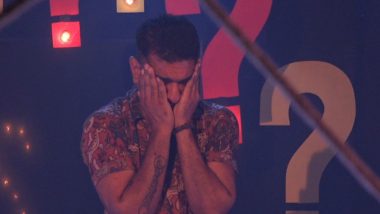 Contestants are made to play an emotionally brutal task to win immunity. Rubina Dilaik's immunity can be won by any housemate who would reveal a dark secret about them that would shock everyone. Rubina can also defend her immunity by doing the same. The contestants share deep, dark secrets about themselves, barring Rahul Vaidya and Aly Goni. Things get very emotional inside the house, but tension also flare-up. Here are the highlights of the latest episode of Bigg Boss 14. Bigg Boss 14 Finale Week: Here’s Why - Rubina Dilaik, Jasmin Bhasin, Rahul Vaidya and Aly Goni Could Be The Top 4!

"We were about to get divorced," she added. She said that they wanted to give each other all the time before making the decision. She added that she felt relieved that if they had not come here together, they might not have stayed together.

Abhinav consoles her when she makes an exit. "Thank you for giving me a second chance baby," Rubina tells Abhinav.

Aly says that his secrets are shit compared to this. Kavita says hers too. Kavita and Jasmin are also apprehensive of believing Rubina's secret. Kavita wonders why would anyone come to Bigg Boss to fix their marriage. Bigg Boss 14 Weekend Ka Vaar Nov 29 Episode: Pavitra Punia Evicted, New Contestants Announced - 5 Highlights of BB 14.

Jasmin asks Aly if she should tell her secret. She asks him if he will still love her if the secret is bad. Aly comes and tells Abhinav and Rubina that people are not believing their secret.

Nikki Tamboli cries and says that she can't reveal her secret.

Aly tells Jasmin that he has figured out what she wants to talk about.

Eijaz enters the activity area next. "I have a problem with touch, because I was molested in childhood," Eijaz said. He says that he had forgotten about this but five years ago he started taking therapy for his anger issues and this past resurfaced. He apologised to his father for not sharing this with him earlier.

Bigg Boss asks everyone to pick which secret affected them the most. Rahul and Nikki say that what Eijaz said that has affected them. Kavita says she is also affected by his story. Aly says that he has seen things like this happening with his own eyes, so he picks him. Jasmin picks him as well saying that she can relate. Abhinav agrees with everyone. Rubina praises Eijaz for being brave. Eijaz gets the immunity stone from Rubina.

Abhinav Says That He Was Depressed

Abhinav says that his first film was a flop, and that he had a lot of hopes from the film. He says that he was suffering from depression after that. He went bankrupt.

Kavita says that she can relate to Abhinav. She says that she was bullied in the hostel and she cried every night. She became very guarded so that people fear her. She picks Eijaz's secret. Everyone else also picks Eijaz again.

Jasmin Says That She Tried To Kill Herself

Jasmin had a lot of scars on her face because of which she used to get rejected a lot. She says it broke her, and she tried to kill herself by overdosing on medicines. She says that she realised her mistake and decided to take life in stride and never accept defeat.

Aly sticks with Eijaz. Rahul, too. Kavita picks Eijaz. Nikki picks Jasmin. Abhinav says that he will go with the majority.

Nikki is up next. She says that when she was 19, she started her career with modelling. She says that she was kidnapped. She said that a casting director had her meet a man along with a few other models. The man picked her and called her later and gave her Rs 4 lakh. But later, a few men caught her and blackmailed her and looted her money and phone.

Kavita picks Nikki, as she says that she had applied oil on his head, hugged him and he was fine. But everyone else, including Nikki, still go ahead with Eijaz.

Kavita talks to Nikki and says that when Eijaz had come to her party, he hugged everyone and he is fine.

Kavita says that when she was 11 years old, her math was weak. She was assigned a tutor who was above 60. Once she was alone at home with the old man, he talked dirty to her and tried to molest her. Kavita reveals that she started screaming and shouting. She was told by the man that no one would believe her.

Kavita told her mom everything. But her mom did not believe her and thought she is trying to get away from math. She says that she was never able to study math or see old men in the same light again. She asks parents to trust their kids and notice the change in their behaviour.

Eijaz says that he doesn't respect Kavita anymore because of what she said. "She hit me below the belt again," he said.

(The above story first appeared on LatestLY on Nov 30, 2020 11:52 PM IST. For more news and updates on politics, world, sports, entertainment and lifestyle, log on to our website latestly.com).