Bigg Boss 14 October 27 Episode: Nikki Has No Feelings For Jaan, Jasmin Has A Meltdown - 5 Highlights of BB 14 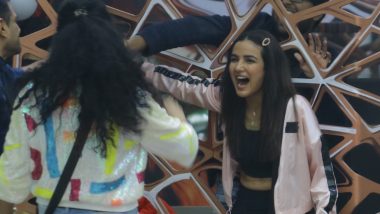 In the episode of Bigg Boss 14, the contestants are given a new task in which they can win the captaincy. Currently, wild card entry Kavita Kaushik is the captain, a position she acquired by chance. To become the next captain, all that the housemates need to do is to take care of their travel bags while sitting on a bicycle and ensure that the bags are with them until the end of the task. While it seems easy, this assignment takes on an increasingly aggressive form where the contestants start stealing the travel bags. Bigg Boss 14: Jaan Kumar Sanu's Mother Rita Bhattacharya Lashes Out At Rahul Vaidya For 'Nepotism' Comment, Says Latter is Jealous of Her Son's Popularity In the House.

Rahul Tells Jaan To Not Behave Like A Girl

Kavita is called in Confession room by Bigg Boss where she is told to make everyone go out as the house has to be sanitised. Kavita asks Shardul to carry sippers of people in the red zone. But Shardul refuses and says that he will carry food. Kavita says that carrying food outside is not allowed. They get into an argument. Bigg Boss 14 Contestant Kavita Kaushik Reveals Why She Agreed To Be A Part Of The Controversial Reality TV Show.

Finally, Shardul realises that Kavita has been asked by Bigg Boss to ask everyone to vacate the house for sanitisation.

Rahul keeps poking Jaan by taking his dad Kumar Sanu's name. Rahul keeps charging at Jaan. And then screams that Jaan should not touch him. Pavitra screams at both of the men and warns them to not be physically violent. She cries and Eijaz consoles her.

Nikki Says That She Has No Feelings For Jaan

Rahul Snatches The Bag From Jasmin

Jasmin cries that it was not cool of Rahul to warn her against physical violence. She screams that this was not a kushti match. She has a meltdown.

(The above story first appeared on LatestLY on Oct 28, 2020 01:02 AM IST. For more news and updates on politics, world, sports, entertainment and lifestyle, log on to our website latestly.com).