The seniors have taken their position seriously and are constantly trying to make life difficult for the contestants. It remains to be seen what their game plan will be. 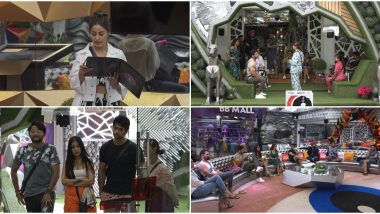 While the contestants thought they would take a few days to settle down and adjust, their entire plans went for a toss as fights and arguments began creating an unsettling atmosphere. The rejected contestants once again face a huge roadblock, thanks to the seniors. They are given another chance to redeem their place inside the house but it comes with a cost. Bigg Boss 14 Preview: Seniors Sidharth Shukla and Gauahar Khan Indulge In An Heated Argument Amid Assigning Tasks To BB14 Contestants (Watch Video).

Rubina Dilaik, visibly upset from the constant pressure by the seniors, snaps back. As a challenge, Rubina is asked to wear the same clothes for a week and if she successfully does it, she will no longer be forbidden from moving inside the house. Similarly, Jaan is asked to get a mohawk haircut, while Nishant is challenged to wear a bikini for the entire week. Rubina resists this move by the seniors and voices her concerns that it will not be right for her to roam around in the same clothes for a week as she is extremely particular about her hygiene while Abhinav on the other hand tries to convince her to agree. Bigg Boss 14 October 4: From Radhe Maa Ki Chowki To Nikki Tamboli’s Manicure Drama, 5 Interesting Highlights From Day 1 Of The Reality Show!.

On the lighter side, Sara Gurpal, conveys a sentimental message from all of Punjab and states that Sidharth Shukla is ‘Punjab ke jijaji’ that comes as a major surprise for him. For the other contestants, sitting around who question her as to why this tag, she hints towards what happened in Season 13 and the entire nation has been a witness to it. Bigg Boss 14: 'Sara Gurpal Married Me for US Citizenship', Claims Punjabi Singer Tushar Kumar.

As the day progresses, another fight erupts between Gauahar and Pavitra. When the latter is just about to sit for her lunch, Gauahar interrupts to which Pavitra takes major offense. She says that she did not appreciate Gauahar asking her if she has checked on other seniors before grabbing her meal when she was about to her first morsel. Visibly upset, Pavitra seeks an explanation from Gauahar further intensifying the situation.

The seniors have taken their position seriously and are constantly trying to make life difficult for the contestants. It remains to be seen what their game plan will be.

(The above story first appeared on LatestLY on Oct 05, 2020 05:32 PM IST. For more news and updates on politics, world, sports, entertainment and lifestyle, log on to our website latestly.com).