Bigg Boss 14 contestant Sara Gurpal has kicked off controversy barely three days into the show. The actress and singer's claim of being single have not sat down well with her rumoured husband, Punjabi singer Tushar Kumar, who lashed out at her for hiding her marital truth. Tushar even furnished a marriage certificate to support his claims that he and Sara had tied the knot in 2014. 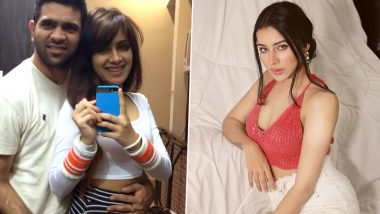 Bigg Boss 14 contestant Sara Gurpal has kicked off controversy barely three days into the show. The actress and singer's claim of being single have not sat down well with her rumoured husband, Punjabi singer Tushar Kumar, who lashed out at her for hiding her marital truth. Tushar even furnished a marriage certificate to support his claims that he and Sara had tied the knot in 2014. And now, Tushar, in chat with ETimes TV, revealed, "Everyone is thinking that I am making tall claims and why now when she is doing a show like Bigg Boss. The reports in the media are saying I claim and I want to clear. I agree I did claim a lot of things but I am not talking about our separation now. I have said all this three years ago in 2017." Bigg Boss 14: 'Sara Gurpal Married Me for US Citizenship', Claims Punjabi Singer Tushar Kumar.

"All these were known on the state level because back then nobody knew her outside India or Punjab. As soon as she entered the reality show Bigg Boss 14, I didn't even know that she was doing a show. All of sudden I started getting messages. Maybe after her entry people must have started searching about the contestants because the show is apparently huge and they look in the past of contestants. All of a sudden I started getting messages. The statement I had given in 2017 started again doing the rounds on the internet and I began to get harassed." revealed Tushar. Sara Gurpal in Bigg Boss 14: Career, Controversy, Love Life – Check Profile of BB14 Contestant on Salman Khan’s Reality TV Show.

He also claims that people are harassing him now. "People are abusing me on social media as they think I am lying. I thought everything was over but apparently not because she is doing better in life and has entered Bigg Boss 14 which is good, the problem is why you keep bringing, dragging me into it. I have tried every bit to keep myself away and now I feel the only way it can stop is when she talks about it." Sara Gurpal in Bigg Boss 14: Tu Chahida, OK Bye and More – 7 Songs of the Punjabi Singer-Actress That You Should Tune to ASAP!.

Revealing that after a point, Sara stopped posting pictures with him, Tushar claimed, "When we started dating, she was posting pictures with me on her social media accounts. That's how a lot of people in Punjab know about us because they were following her. While she was doing it she felt that in India married women especially actresses do not have that much fan following. She was very clear about it that she does not want to miss out on her fan following. She started keeping her personal and professional life separate and I never had any issues with it. So, we never posted anything after that. But between us she was the one who posted our pictures on social media and later we got separated. After Bigg Boss started I was getting harassed because she claimed everywhere that she is single and people thought I was trying to take mileage by spreading lies. That's when I decided to come out and speak. Since she never spoke about our marriage people thought I was a liar."

When questioned on why they decided to part ways, Tushar went on to say, "She was not happy in the marriage because she was not getting work in the US and she did not want to live a normal life. And people here just don't sit at home. Everybody here goes to work or does something. The problem was being normal was not easy for her because people knew her in Punjab and she did not want to leave all that for marriage. I just want to get over this. I don't want my life to be written about my personal life. I want to be known for work not for the mistake I made in my past."

"I have never lived in India for long so we arrived at a common conclusion. I sent her to India and we decided that she will work there and in between when she doesn't have projects lined up, we can be together here. Another issue was we were very young and we did not think about the consequences. Even she was in just the early stage of her career. Till then she hadn't made it big in the industry. When we were together and she started getting work, for us it was like she will try in the industry if she gets success it would be awesome and if she doesn't it's ok we will be together. We were really young and we did not think about the future," revealed Tushar.

Talking about what ent wrong and how things escalated, Tushar said, "I brought Sara here to the US, I took the entire responsibility. But the problem started when she came here and realised that Punjabi industry is not as grown here as it is in Canada or Punjab. She tried to get work here in America but had no luck. So, that was kind of getting in her head and I sent her to India on my expense. I organised her return ticket to India when she wanted to go there and try for work. After going to India she got a movie and that too a side role not a lead. That's when things started falling apart between us."

"It was all about fame. She chose fame over me and our marriage." He also went on to reveal that his separation with Sara is not legalised on documents. "We were married for three years or so. We met in 2014 when she did a song and I knew the director so we started talking. We are not legally divorced but we are separated."

Tushar also requested fans of Bigg Boss 14 to confront Sara on the show. "I don't know why she is saying this again and again that she is single. Now, that she is on this huge reality show, I would request someone to just put the question in front of her. If you guys put me in front of her I will finish everything in just 5 minutes and then we both can move on. I am actually really hurt that I have to go through this stuff. If she would have just admitted back in 2017 or a couple of years ago when she was in Punjab, probably this would have never happened. She wanted to move to India and I am fine. It is her choice if she wants to choose fame over everything else let her do that. In our culture it is often said he's a guy he will handle but nobody understands, we also get stressed. My family is also worried about me," he concluded.

(The above story first appeared on LatestLY on Oct 06, 2020 04:37 PM IST. For more news and updates on politics, world, sports, entertainment and lifestyle, log on to our website latestly.com).