On Sunday's WKV, Kashmera Shah gets eliminated. That’s not it, as we also get to see Aly Goni and Nikki Tamboli engaging in a massive fight and Rubina Dilaik-Jasmin Bhasin getting into a heated argument where the former calls the latter a ‘chudail’. Check it out. 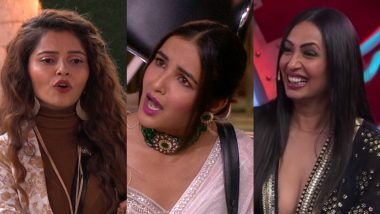 After the entry of the challengers on the show, Bigg Boss 14 is turning out to be quite entertaining. On yesterday’s (Dec 19) Weekend Ka Vaar we saw Salman Khan blasting at Arshi Khan for speaking ill about Vikas Gupta’s mother. And on tonight’s WKV, we saw Kashmera Shah getting eliminated. That’s not it, as we also get to see Aly Goni and Nikki Tamboli engaging in a massive fight and Rubina Dilaik-Jasmin Bhasin getting into a heated argument where the former calls the latter a ‘chudail’. Incase, you have missed watching the episode, read the top five highlights below. Bigg Boss 14 Weekend Ka Vaar December 19 Episode: Arshi Khan Threatens to Leave the Show; Aly Goni VS Nikki Tamboli – 5 Highlights of BB 14.

Nikki Tamboli Gets Into A Massive Fight With Aly Goni

The show starts with an argument between Aly and Nikki wherein the topic is about how the former was laughing when Rakhi Sawant abused the latter. Aly tells Nikki that she should have not popped the issue in front of Salman Khan, to which a massive fight erupts between the two. We also get to see Tamboli loses her cool and also pushes Aly.

Salman Khan gives a task to the housemates wherein he asks a few questions to each inmate one by one and if the answer is yes then the guy on the table will be waxed. Rakhi waxes Rahul Mahajan, Eijaz goes ah ah as Jasmin removes his baal, Nikki gives a parlour session to Aly and the task was indeed fun.

Up next, another task gets introduced where all the housemates have to choose who among Jasmin Bhasin and Abhinav Shukla is the most boring. The voting starts and all the contestants cut Abhinav's reel and tag him blah, but only Arshi votes for Jasmin. The end result naturally sees Abhinav getting declared as the boring housemate.

When a caller quizzes Rubina if she trusts Jasmin the way she used to earlier, Rubina answers with full honesty. She says, “I believe in friendship but trust is not the same.” After listening to this, Jasmin replies, “If there is no trust, there is no use of such a friendship. I was genuinely working on it but now I will stop making any effort.” Amid this, the argument intensifies and Rubina calls Jasmin a 'chudail'. With this, we sense a major fight between the two friends in the coming episodes.

Aly Goni Gets Dethroned, Rubina Is The New Captain

Salman Khan informs one and all that Manu Punjabi and Abhinav Shukla have got the least votes this week and one among the two will leave the show. However, the power to save one lies in the hands of the captain, Aly Goni. To this, we see Aly picking Abhinav. Well, this was a prank by Salman as he wanted to test Aly. The host then quizzes Rubina that why she never wants to be the captain of the house? To which, she answers that she does not want to. And then Salman drops the bomb and makes Rubina the new captain.

This week Arshi Khan, Kashmera Shah, Manu Punjabi, Abhinav Shukla, Eijaz Khan were the ones nominated. And finally, the host declares that it is Kashmera Shah who gets evicted. Rakhi and Arshi get disheartened.

That's it, guys! These were the major happenings from tonight's episode of Bigg Boss. Talking about Monday, fans will witness the nomination task and a major fight between old foes Rubina and Rahul Vaidya. Excited? As we are for sure. Stay tuned!

(The above story first appeared on LatestLY on Dec 20, 2020 11:01 PM IST. For more news and updates on politics, world, sports, entertainment and lifestyle, log on to our website latestly.com).