Here comes a piece of big news for all Sidharth Shukla and Rubina Dilaik fans. As if reports are to be believed then the two Bigg Boss winners are all set to team up for a project. Check out the full story. 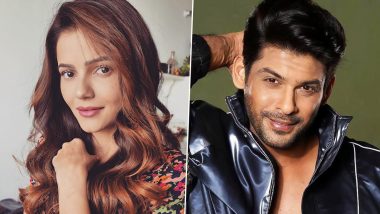 Here comes a piece of big news for all Sidharth Shukla and Rubina Dilaik fans. As if reports are to be believed then the two Bigg Boss winners are all set to team up for a project. Considering both have a huge fan base, if this news turns out to be true, then it's going to be superhit. The rumour has been shared by one of the fan clubs of Rubina on social media. That's not it, as it's also said that Zee Music Company has approached the TV stars for a music video. Marjaneya Song Out! Rubina Dilaik and Abhinav Shukla’s Chemistry Looks Cute in This Neha Kakkar Track (Watch Video).

Rubina and Sidharth were seen in a single frame on Bigg Boss 14 where the latter was a toofani senior. Their banter on the reality show was very much interesting, as Dilaik was the one who would always argue and put across her point which never used to not go down well with Mr Shukla. If the two are seen in a song together, it'll be fun to see their camaraderie. Excited much? Bigg Boss 14: Sidharth Shukla Calls Rubina Dilaik Selectively Dumb, Feels She Is Less Entertaining Than Eijaz Khan (Watch Video).

@ZeeMusicCompany has approached #SidharthShukla and #RubinaDilaik for a music video which was sung by #AnkitTiwari & #HarshdeepKaur . If all goes well then shooting will start in second week of April.

To note, there has been no official confirmation regarding the above news neither by the actors nor by company. Having said that, these days music videos are LIT, as they churn the much-needed hype in no time. Rubina's first song was with her hubby Abhinav Shukla which is titled Marjaneya. Stay tuned!

(The above story first appeared on LatestLY on Mar 24, 2021 01:53 PM IST. For more news and updates on politics, world, sports, entertainment and lifestyle, log on to our website latestly.com).