Although, it has become the latest target for piracy as all episodes of the show have now been leaked in HD. 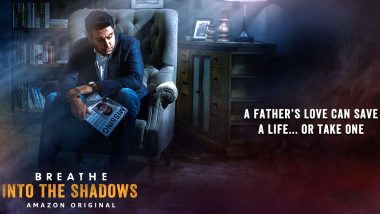 Amazon Prime's much-awaited series, Breathe Into the Shadows' second season released recently and it has been garnering rave reviews from the critics and audiences. The series stars Abhishek Bachchan, Nithya Menen and Amit Sadh in lead roles. This series second marks Abhishek Bachchan's digital debut as he plays psychiatrist Dr Avinash Sabharwal. Actor Amit Sadh reprises his role of Inspector Kabir Sawant who is a recurring character from the first season that starred R Madhavan. Choked actress Saiyami Kher is also a part of the show. The series began streaming on July 10 on Amazon Prime and immediately became a talking point on social media. Although, it has become the latest target for piracy as all episodes of the show have now been leaked in HD. Paatal Lok All Episodes in HD Leaked on Telegram & TamilRockers Links for Free Download and Watch Online.

Piracy has become a big threat for all major series releasing on all streaming platforms. Looks like the Abhishek Bachchan and Amit Sadh starrer series has 12 episodes and all of them have leaked online. Reportedly, Breathe Into the Shadows is available in 1080p HD, 480p, 720p on some piracy sites and also cam-rip versions are available online.

Despite several efforts being taken to stop piracy, the menace of online leaks still plagues the industry as several people still download or watch pirated versions online. LatestLY highly condemns these piracy acts as it affects the business adversely for makers.

(The above story first appeared on LatestLY on Jul 11, 2020 11:12 AM IST. For more news and updates on politics, world, sports, entertainment and lifestyle, log on to our website latestly.com).