Anushka Sharma-produced web series Paatal Lok released on May 15 on Amazon Prime Video. It has not even been 24 hours and this nine-episode series has already become victim of online piracy. 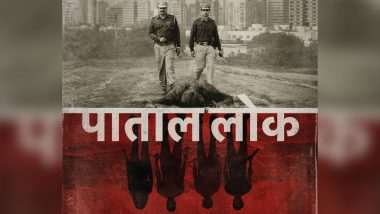 The web series of the season that has blown everyone's mind away is also a prime target of the online miscreants. We are talking about Paatal Lok whose all nine episodes have been leaked in HD by TamilRockers for free download. The pirated print copies and download links of Amazon Prime Video web series produced by Anushka Sharma is also shared conveniently via messaging apps, especially Telegram.  The makers of every film, television shows and web-series ensure to take maximum safety measures in order to protect the films or other shows getting leaked online. But somehow, it becomes the victim of online attack. A film or a TV show or web-series getting leaked online does affect the makers' business. But that really does not stop some of the piracy sites to do what it does always. Paatal Lok is reportedly available in 1080p HD, 480p, 720p as well as in cam-rip versions. Paatal Lok Review: Anushka Sharma’s Amazon Prime Series Is Powerful, Absorbing and Disturbing Boosted by Jaideep Ahlawat’s Knockout Act.

There have been numerous times when filmmakers, actors and producers have come forward and have asked the audience to say ‘no to piracy’. Despite several attempts, there are many who still who end up watching the pirated version by watching them online or downloading it.  LatestLY highly condemns these piracy acts as affects the business of a project adversely. It is high time industry come together and take a strong stand against these illegal activities.

(The above story first appeared on LatestLY on May 31, 2020 10:51 PM IST. For more news and updates on politics, world, sports, entertainment and lifestyle, log on to our website latestly.com).